You are here: COG Webcast > Sermons and Media > Videos > Those Who Bear God’s Name

Those Who Bear God’s Name 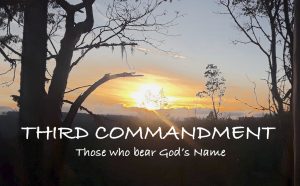 It is no easy matter to bear God’s name! Moses and Jesus agree that there are proper and improper uses of God’s name. And, they go far beyond casual swearing in daily conversation. There is much more to the third commandment about not taking God’s name in vain, than using God’s name in silly banter or irreverent dialogue. When we look at the concept of a ‘vain’ use of God’s name it means a useless or worthless use of his name. It is using God’s name without due respect, or in a false or deceptive manner. And perhaps, this last misuse of God’s name is the most relevant today.

Judged by ‘Every Idle Word?’

Jesus told the religious leaders of his day that they would have to give an account to God of ‘every idle’ word they had spoken. They could not really speak the truth of God from an evil heart. Both their words and actions were indications that their heart, their motivation, was not in line with God’s purpose. They were not fulfilling his will in teaching others God’s way by word and example. As a result these religious teachers were found wanting. And they would be judged by their words, because their lives did not reflect the truth of the God they professed to worship. When people bear God’s name falsely, it is a reflection on their character, as they have not represented God honourably. For those who bear God’s name should do so with an awareness of God’s nature and awe of the sobering reality of his presence.

This is why Solomon reminds us to control our speech and weigh our words. We should not be hasty or impulsive in our speech, especially when it comes to speaking about God or for God. God is gracious and patient, but he will not tolerate those who misrepresent him or his nature. God is not a ‘hip pocket’ God, whose name we can use when we need to escape some unpleasant situation. We are not to be like the pagans who invoked the name of their god as if it were magic. Nor are we to develop mantras using God’s name as if our repetitive saying of the name had power in itself. Sometimes Christians fall into this trap, thinking that ‘belief in the name’ of Christ is all you need to be saved. But this is a simplistic misapplication of Jesus’ message.

Do You ‘Believe in the Name?’

Belief in the ‘name’ of Jesus was a deep respect built on the understanding of Jesus as their king and master. And this belief required action. Your belief in Jesus’ name made you an ambassador of a way of life, and a representative of the king and his kingdom. Jesus’ gave his disciples authority to pray to the Father in his name. This was not a religious formula or incantation, rather it was prayer based in the authority of Jesus as our divine representative before the throne of God. So Jesus’ name was an expression of his Lordship over all creation, his role as our Saviour, and his service as our High Priest. In invoking the name of Jesus, we are using it in order to accomplish his will and not our own desires.

Israel, the people of God who were called to bear God’s name, were expected to be holy as God is Holy. They had to live clean lives, lawful lives, as God’s chosen ambassadors to the other nations. Their duty as representatives of the name of God, was to follow in Christ’s footsteps. And Jesus did nothing of his own accord, but only that which faithfully honoured his Father’s name. So those who serve God’s name cannot do so hypocritically. They cannot be living lawless lives leading others into error, while claiming to teach about God and represent his name. As the prophets warned, many of the people of Israel who had been called to bear God’s name, became scattered exiles . They had learned through hardship the consequences of their rebellion that had dishonoured God’s name among the nations.

Jesus gave a stern warning to those who performed miracles in his name. For to act on God’s behalf while being lawbreakers was taking God’s name in vain. And, the result would be those most dreaded words, for Christ would say to these hypocrites, “I never knew you. Depart from me you lawbreakers!” As disciples we must be careful to be honest and blameless, so our example gives honour to God’s name. Perhaps we pray daily as Jesus taught his disciples, “Our Father in heaven hallowed by your name.” If we truly believe in the Lord our God, then we will honour his name in word and in actions that reflect his character. We will shed the light of God’s word by following his teachings as an example to others of the benefits of God’s ways. This will bring glory to God’s name.

Learn more about God’s commandments and representing him faithfully.
http://cogwebcast.com/beliefs/ten-commandments/