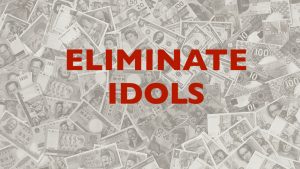 The Command Against Idolatry

When God brought Israel out of Egypt he asked them to eliminate idols from their lives. God was their deliverer, their saviour and the only one worthy of worship. He did not want his children, creating images to represent him. Nor should they be worshipping things that were not God, things that could not deliver them. In worshipping and loving God alone, there would be blessings to a thousand generations. These Israelites had seen the plagues that God had used to decimate Egypt and deliver his covenant people. Each one had been designed to strike at the heart of the Egyptian’s idolatrous worship. They had witnessed the great power of the God of Abraham, Isaac, and Jacob, that had demolished the credibility of Egypt’s gods.

All the God’s of Egypt

God struck a first blow against Osyrus, Isis, and Hapi. He attacked these gods of the Nile by making the life-giving water undrinkable. Then frogs overwhelmed the people and died leaving stinking heaps of rotting flesh, thus mocking the frog-headed goddess of fertility, Hequet. Later, Apis the sacred bull, was discredited when all the cattle in Egypt became diseased and died. But none of the Israelite’s cattle were harmed. In the end a thick darkness covered the land, obscuring all light. This was God’s way of diminishing the sun god, Ra, in the eyes of his worshippers. The Lord God made a mockery of the false gods of Egypt who were powerless to protect, crops, animals, or people.

No Place for Dual Allegiance

In Paul’s time the great system of Greek and Roman gods were the idols of the day. Paul warned the people of the consequences of trading the truth for a lie and worshipping the creation, instead of the Creator. He instructed them to eliminate idols from their lives. In each generation the God of Creation asks people to choose to worship him, alone. There is no place for dual allegiances.

Jacob understood this when facing the possibility of attack from neighbouring tribes. His sons had taken revenge against the household of the prince who had raped their sister, but there would be a price to pay. Jacob, understanding the seriousness of their situation and prayed for God’s deliverance. In a symbolic gesture, Jacob had his family bury all of their idols and rededicate themselves to God. He understood that God’s deliverance was a matter of having only one God, and forsaking their worship of idols. And God protected them from their enemies. It is only the true God who has the power to answer prayers and keep promises.

Idols are counterfeit objects of worship. They are powerless imitations created with the intent to deceive. That is why commanded his people through Moses to avoid idolatry. He wanted his people to love him alone, and he would tolerate no rivals. Unlike the pagan cultures around them, God’s people could not have their ‘hip-pocket god,’ the small idol that people carried as a talisman to protect them.

Idolatry in Paul’s day still included the small religious objects of worship. But Paul warned of a more insidious form of idolatry. Prophesying of the ‘last days’ and reflecting on the nature of Roman society, Paul cautioned that men would be ‘lovers of self’ and ‘lovers of money.’ A counterfeit would develop, that would have a ‘religious facade’ while elevating human endeavour as worthy of worship. We can see this happening in our M&M culture, of materialism and meaninglessness. When society elevates the acquisition of material wealth, security, and safety, above God, it is an idolatrous society. Having set up human standards and the state as supreme, it rejects God’s values of truth, sanctity of life, and freewill. It is a culture that denies the existence of the Lord God. But, Paul warns that idolizing men and their works would lead to a self-willed, inhumane, sensual, calloused, and materialistic culture.

When the State Demands Worship

The apostle John in vision saw the rise of a great counterfeit idolatrous religious system. It’s hallmarks would be economic prosperity and enforced submission to a lying, miracle-working, religious leader. This individual would force people to worship him, and bear his stamp of approval, or suffer death. And the whole earth would be dominated by this blasphemous religious political system. These events are yet future. Tt will be up to God’s people to eliminate idols from their lives and recognize and resist this great evil system. God says we will overcome idolatry by keeping his commandments and having the faith of Jesus Christ to make the right choices. We can have confidence in Him, because he alone can deliver us.