You are here: COG Webcast > Sermons and Media > Videos > The Authentic Gospel & the Messiah

The Authentic Gospel & the Messiah

The Authentic Gospel & the Messiah

The Messiah oratorio penned by Handel is a masterpiece of biblical teaching.

Do you know that message? Are you living in that hope? Learn more about God’s message of hope to humanity in this series of sermons. 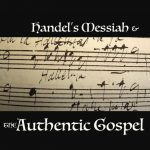 The Authentic Gospel & The Messiah

The biblical writers, Jude, Paul, and John, encouraged believers to “fight for the faith once delivered.”  They urged their readers to recapture the authentic gospel — what was understood from the beginning. Do you know that gospel? …In this festive winter season it would seem that many have never known ‘primitive’ Christianity. Or, they have forgotten the authentic gospel message. 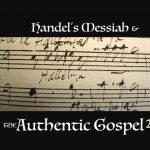 The Authentic Gospel — Comfort My People

Handel’s  ‘Messiah’ was mysterious to the public who knew little of the bible. So in beginning his work with the message of, “Comfort my people — says your God,” Jennens desire was to speak to the heart of his audience. He wove the scriptures together to appeal to people’s emotions and longings – to comfort the weary with God’s words. And that message still resonates today… 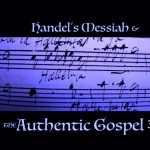 The Authentic Gospel — God With Us

The good news, the gospel, was about the coming of the Messiah. His coming would be in a time when darkness covered the earth. A time when ignorance of God’s ways would bring death, destruction, and misery. And his appearance would bring light to all nations. The Sun of Righteousness would arise and bring a healing light. 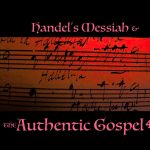 The Authentic Gospel — Messiah Our Saviour

Eye-witnesses testified to the fact that Jesus was the Messiah — the anointed one.  Jesus, the Christ, the Word who became flesh was born into the world to become the Deliverer. Though he had lived “from eternity” he came to earth as a man for the purpose of saving his people. But what was he saving us from? 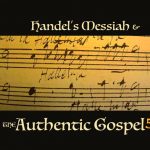 The Authentic Gospel — Messiah the Lamb of God

The Messiah’s coming was to offer hope, so we read with astonishment Isaiah’s account that foreshadowed Christ’s first coming. Instead of being heralded as our redeemer, he was despised, reviled, and abused. He suffered for us, and his suffering has set us an example of perseverance in the face of persecution. The Lamb of God offered life to all those who would follow him… 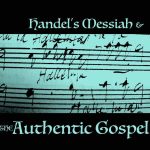 The Authentic Gospel  — Messiah our Healer and Shepherd

In 1740 the Messiah oratorio was first performed. It was a tribute to the Passover season and the death and resurrection of Jesus Christ. This was in keeping with the traditions of primitive Christianity and the observances of the first century Jerusalem church. So Jennens, the Messiah’s lyricist, hearkened back to the prophecy of the Messiah in the book of Isaiah. This passage, often subtitled the “suffering servant,”  foretold a message of Christ’s first coming as the Messiah our healer.

The Authentic Gospel — Messiah the Son of God

Handel’s Messiah imparts the understanding of the Messiah’s relationship to the Most High. It is that of beloved Son to his Father. And Messiah the Son of God has an inheritance — this world.  From the beginning, it was the Father’s intent that the Messiah should claim his inheritance. His coming would be a blessing to all nations. His rule as King in Zion would herald a time of peace and freedom. But he was not honoured when he came the first time. Will he be welcomed when he comes to claim the throne that is rightfully his?

Handel’s Messiah concludes with words from Job who lived four thousand years ago. Job prophesied, “I know my redeemer lives and he will stand on the earth in the latter days.” Job was convinced that long after his death he would witness this event with his own eyes. He was angered by his friend’s threats, because he knew that God was just. Job was confident of a bright future because his redeemer, the Messiah will return. He knew he had a redeemer — someone who would pay his debt, a debt that he could not pay. And this gave Job hope and assurance, for it was God who was his surety!