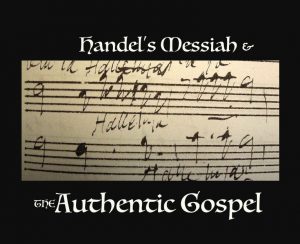 The biblical writers, Jude, Paul, and John, encouraged believers to “fight for the faith once delivered.”  They urged their readers to recapture the authentic gospel — what was understood from the beginning. Do you know that gospel? Jude and Paul also warned about the false teachers who would profess to know God. But, they would lead people away from the truth with a gospel of “lawlessness” that denies God. In this festive winter season it would seem that many have never known ‘primitive’ Christianity. Or, they have forgotten the authentic gospel message. Yet, people still flock to concert halls to hear Handel’s Messiah. Sadly, many no longer have any understanding of what the lyrics really mean.

Handel wrote the beautifully inspiring score to the ‘Messiah’ oratorio. But it was Charles Jennens, who pieced together the biblical storyline into a powerful witness to the authentic gospel. When it was first performed in Dublin in 1742, the ‘Messiah’ met great resistance from the established church. It did not conform to traditional orthodox Christian views. Rather, it became merely a “tolerable curiosity.’ It was out of the mainstream of traditional Christian thought. Instead, it harkened back to the beliefs of the ‘primitive’ church — the first century church in Jerusalem. As a result, the lyrics were ‘mysterious’ to the public, as the people had not been taught these scriptures in their churches.

The ‘Messiah’ a Guerilla Tactic?

Jennens was a non-conformist Christian. His lyrics were a concerted attempt to preach the ‘authentic gospel.’ It could perhaps be considered now as a “guerilla’ tactic to preach the truth. Carefully Jennens crafted a masterpiece about Jesus, the Messiah, as sung through the voices of many biblical writers. He was not ashamed about the authentic gospel. Rather, Jennens used his talents and the theatre venue to preach the message of hope in the Messiah, and to praise His name. Do you know that message? Are you living in that hope?

What is the authentic gospel that the Messiah delivered?
Find out more here: Gospel Series