You are here: COG Webcast > Sermons and Media > Videos > Dealing with Oppressive Government 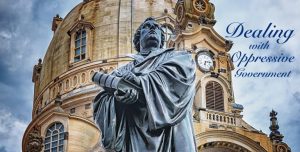 Christ warned his followers that they would need to deal with oppressive governments and their agents. He said that in serving Jesus, his disciples would have to stand before leaders and rulers as a witness representing the Lord they served. This was not going to be an easy task. In fact Christ likened it to being sheep sent out among the wolves. So his advice to his servants was that they were to be as wise as serpents, but as harmless as doves. In our time, many are having to stand up for Christian values. And we need the wisdom to deal with oppressive governments and their representatives, motivated by wisdom and the desire to represent God faithfully. How are we managing?

Who Do You Obey?

Recently, in our province we have seen the government take-over of a Christian hospice that would not offer ‘assisted death’ as one of their ‘services.’ Having accepted government money to support their work, they became beholden to government. As a result they lost everything, when they would not comply with this new government policy. Perhaps one lesson for Christians is to refrain from taking money from government. But there are other more important lessons. The example of Peter and John illustrates the need to keep speaking the truth in spite of oppressive government oversight.

They boldly confronted the ruling elite of their day who were trying to prevent them from speaking in the public square. And when commanded to stop teaching about Jesus, they replied with a question, “Do you think God wants us to obey you, rather than him?” The disciples were eye-witnesses to Jesus’ life and resurrection, so they had full assurance of Christ’s support when they continued to speak in his name. For them, the government held no authority, for it was only Jesus the Messiah who could offer them what they truly desired – eternal life. They knew the government could not save them, and they were willing to risk their lives to teach this truth about the Saviour.

Centuries later, another man took courage from the examples of these early disciples. This year is the 500th anniversary of Martin Luther’s trial before the Diet of Worms. Luther, a lowly priest from a backwater town in Germany had posted his 95 Theses in 1517 and dared to defy the Pope over the issue of indulgences. Four years later in April of 1521, Luther stood before the Pope’s representatives and the civil government officials to defend himself against their accusations. He was fighting for his life, but to him the Word of God was what was of utmost importance. Luther was facing the ‘cancel culture’ of his day, and being burnt at the stake along with his books was a potential outcome. With humility and dignity he challenged the assembly to prove to him according to scripture that his writings were in error. But while the judges were deliberating, Luther was whisked away by a government official. This elector provided Luther safe passage and a place of refuge where Luther spent his time translating the bible into German, the language of the common people.

The oppressive government of the time with its religious partner learned that trying to kill the messenger did not solve their problem. In fact, the “danger, disaster, and desolations” that Luther had predicted were some of the unintended consequences of the failed attempt at censorship by the state. Luther understood that the real power was in God’s hands, and even the greatest of kings, pharaohs, or potentates could be removed by God at any time. He had seen the inconsistencies in the Papacy and religious and civil councils and therefore, he could no longer submit to their rule over his life. So he gave a powerful witness to all the people present at his trial, and his legacy remains alive today. Luther’s insistence on the principle of sola scriptura continues to be instructive. For as Luther concluded it is only evidence from scripture that can change our stance on an issue of Christian duty. It is neither safe nor honest for Christians to speak against their conscience, for ‘if it is not of faith it is sin.’

This principle of sola scriptura was important to Peter and John as they made their defence a second time before the religious/civil leaders. They too were willing to speak truth to power, and convict those who had participated in Jesus’ murder of their guilt. They were forthright in claiming, “We must obey God, rather than any human authority!” And they went further to say, that God’s spirit would only be given to those who obeyed God’s commands. This provoked some of the government officials to the point that they plotted to kill Peter and the others. However, there was a wise Pharisee, Gamaliel, who spoke with a word of caution. Gamaliel warned them not to take action, but to wait and see. He knew that many false messiahs had arisen before and failed. But, if Peter was speaking the truth, Gamaliel advised, “Keep away from these men and leave them alone, because if this intention or this activity is of men, it will come to nothing. But if it is of God, you will not be able to overthrow them, lest perhaps you be found even fighting against God.”

This spiritual conflict with oppressive government and its human traditions and corrupt laws is nothing new. There has been a continual contest between darkness and light and as a result those representing the light have often been insulted, ridiculed, criticized, persecuted, and falsely accused. In times such as these Peter tells us to have the same mind as Jesus Christ. He suffered without compromising with God’s word. He continued to faithfully speak the truth, and seek the good of all, even those who persecuted him. Jesus was able to accomplish this because he knew that a new government was coming. He continues to look forward to that time. The time when the Father will send him to restore good, just government and oppressive government will only be a thing remembered in history texts. We need to arm our minds with this same hope, so we can faithfully represent our Saviour. If and when we are called upon to give an account to an oppressive government of our day, we can be assured that God will give us the words we need to be an effective witness on his behalf.