You are here: COG Webcast > Sermons and Media > Videos > Content or Contentious? Lessons from the Wilderness 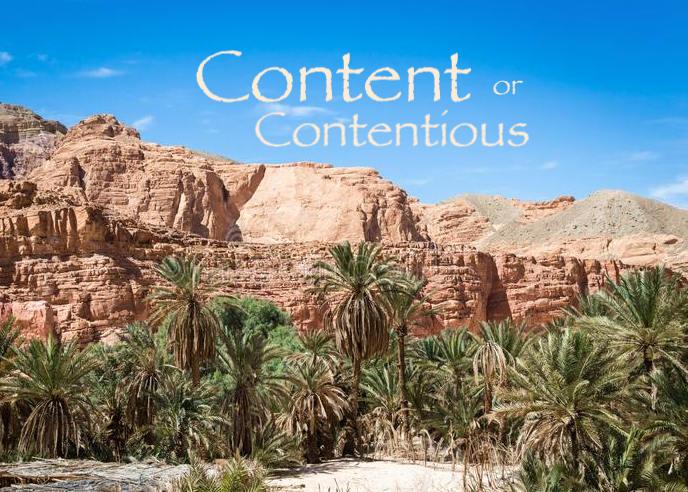 Israel’s experience in the wilderness, is one that makes us ask the question, ‘Are we content or contentious?’
God had delivered the people from slavery in Egypt.  He had delivered them from Pharaoh’s army and protected them as they crossed the Red Sea. But were the people content? Within a week of having left Egypt behind them, they were already murmuring, upset or  fearful about their situation and the lack of water. Had God just brought them out to slay them in the desert they wondered? Some folks thought so! How quickly they had forgotten God’s miracles. But in spite of their whining and complaining God would fulfill his promises.

It was at this early juncture in their journey that God made a conditional promise. If they would listen to him, and keep his word, then they would not have to endure all the diseases of Egypt. Are we content or contentious, in knowing that God is our healer? Do we trust the one that forgives our sin, redeems our life, and restores our health? For like the ancient Israelites, God is now leading his children through a wilderness, and our wilderness has many similar challenges. One of the greatest challenge is whether we will have faith in God to listen and obey, in spite of dire circumstances. Do we trust in God’s covenant loyalty and loving kindness to provide us pure water and good food, physically and spiritually speaking?

Christian’s need to understand that the one leading them today, their Good Shepherd, is the same one that led Israel throughout their wilderness journey. Jesus, the Messiah, was unequivocal in stating that he was ‘I Am’ the Lord God of Israel, the one who had known Abraham. And  the Jewish leaders of his day were plotting to kill him for this assertion. Jesus repeated the same conditional promise to his followers, the one he had given centuries earlier to Israel.

At Marah, only a few days after escaping from the full force of the Egyptian military, the people of Israel had despaired of life once again.  They accused the Lord God of bringing them out of Egypt to kill them with thirst, since the water at Marah was undrinkable. In response, the Lord provided them with the fresh water they needed. Then, the Lord promised that he would be their saviour, their deliverer, the one who could forgive their sins, and heal them. But there was this condition, ‘if they would obey his word.’ The Psalmist in rehearsing the history of Israel revealed just how difficult it was for the people to faithfully follow the Lord. But God’s promise has not changed, he still offers healing to those who seek him.

This consistent message of healing for those who have faith in the Lord, was reiterated by Peter and James in their epistles. It was by Jesus stripes, and his sacrifice that our sins are forgiven and we can be healed. It was the prayer of faith that would heal the sick, so the Lord could restore them to health. God’s word is our guarantee, that God will fulfill his promises, if we are wholehearted in listening and following his instructions. God’s promises are sure, but they are sometimes conditional. So are we content or contentious? Are we content to follow God’s instructions, or are we always arguing, thinking our way is better than the way of the Lord?

Bread in the Wilderness

After another week in the wilderness, and in spite of the miracle of fresh water at Marah, the people were moaning once again. Many were complaining that God had brought them out to kill them — with hunger this time. But once again the Lord heard their discontent and answered with meat and bread. Mark, the disciple of Jesus, wrote about an event that mirrored the events in the wilderness. This time the people of Galilee had followed the Lord, and had been without food for 3 days. So Jesus took pity on their situation and offered to provide food. Jesus disciples were amazed, and said, “How can one satisfy these people with bread here in the wilderness?” They had unwittingly made the connection between their time and the time of Moses. And yes indeed,  the Lord could and would provide food in the wilderness. As he had fed the multitudes of ancient Israel, so he could surely feed the four thousand on the Galilean hillside. For the disciples and for Israel it became a lesson in faith and obedience.

This lesson of obedience, lasted 40 years for Israel. During that long wilderness journey God provided sustenance in the form of manna, a substance that could be found every morning, except Sabbath. And this became the test of obedience, the sign of those that would choose to be God’s faithful people. Would they be content and listen to God, or contentious, trying to do things their own way. Would they avoid gathering too much during the week so it would not spoil and breed maggots by being left overnight? And would they gather sufficient on the sixth day to meet their needs on the Sabbath as well, trusting that it would not spoil?  These lessons of willing obedience to the Lord’s commands are still valid for us today. We do not have manna to test us, but we have many admonitions about not grumbling, complaining, and whining. And we have the Sabbath to remind us weekly of our covenant with the Lord God who created the Sabbath.

When it comes to being content or contentious, our Lord, wants us to learn from the examples of ancient Israel in the wilderness. He expects us to trust him to provide the sustenance we need, and to be content with what he provides. The Lord is the source of our peace and contentment, because he has the power to help us in every circumstance. If we are innocent and blameless, following him, then he will support us so we can shine as lights of his way in the world.