You are here: COG Webcast > Sermons and Media > Videos > Wisdom to Stand in Perilous Times – Chanukah 1 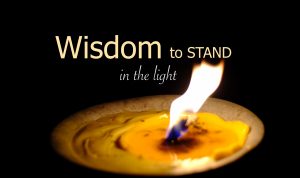 Wisdom and the Word

From the beginning, The Word of God has given his people the wisdom to stand against opposition and the powers of darkness. At creation, the Lord God’s wisdom brought light to cast out the darkness. Through wisdom the Lord created the world, the sea, and the sun and stars to shed light on the earth. It has always been the Lord who has provided light and life. And though those in darkness may try to understand they cannot because they reject the Lord who is the source of light, They may even try to overpower the light of life but they cannot. In the end it is the Lord who will defeat the darkness by his wisdom. So do we have the wisdom to stand with the Lord of light, and hold-out against the darkness that may surround us?

Love the Light Hate the Evil

Many of us who believe that the Lord is God may say that we, ‘Love the Lord’ but do we share his wisdom and his hatred of all that is evil? John’s vision in Revelation paints a picture of the Word of God, the Lord of Lords, coming as a warrior king who will return to settle accounts. He will judge, convict, and sentence the corrupt rulers of this world and avenge the blood of his servants who were murdered. At that time the Lord will not accept any excuses from those who were guilty of evil. He will not accept their rationalization that they were just ‘following orders.’ Those caught up in the system of deceit and deception will suffer the Lord’s vengeance.

Chanukah and the End of the Age

Jesus prophesied of this time at the end of man’s misrule, the end of the cosmos, just prior to his return as a conquering King. He warned his disciples of the religious leaders who would mislead and deceive their followers prior to this time of unprecedented trouble and ethnic and national strife. As a result of the extreme pressures brought to bear against those who identify with Jesus as Messiah, many would lose faith and even persecute others. Jesus then compared the coming age of turmoil with that of the time of the Maccabees as described by the prophet Daniel.

During Jesus’ ministry, the Feast of Dedication (Chanukah) was a time commemorating the Maccabees re-dedication of the temple in the winter of 164 BCE. Jesus confronted the religious leaders of his day, citing Psalms 82 and God’s judgment against the ‘gods’ the human rulers who supported the cause of the wicked, and ruled unjustly. This was a major part of the Chanukah story, just as it was the reality in Roman Judea in the first century. And this pattern of human oppression and tyranny would continue and culminate in a final corrupt social order, as was prophesied But eventually Jesus, the Word, will return to be the final judge. The Lord God through his written word encourages his people during times of extreme pressure to resist the evil and take action to do what is right and walk in the light of the Word.

Paul wrote to the Thessalonians that they needed to arm themselves with a love of the truth so they would not be overthrown by the powerful deception that would delude the whole world. And his message to us is that we should stand firm in the truth and continue in good works. We need the wisdom to stand in the light so we will not be subverted by the darkness.

Tags: Chanukah, end time prophecy, Jesus Christ is the Word of God, light and darkness, love of the truth, return of the king of Kings, wisdom to stand