You are here: COG Webcast > Sermons and Media > Videos > Why the Messiah and Jerusalem are Stumbling Stones

Why the Messiah and Jerusalem are Stumbling Stones 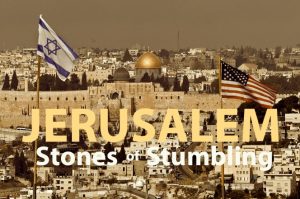 The Messiah’s Message for Chanukah

During the festival of Dedication in Jerusalem the religious leaders were asking, Jesus, “Are you the Messiah?” Though they had witnessed many miracles and heard Jesus’ teaching, they did not believe. They were unwilling to listen, learn, and follow the Messiah. They plotted to kill Jesus, accusing him of blasphemy, because he said he was the son of God. He in turn reminded them of the scripture that said, “You are gods.” For they all were children of the Most High. But they would die as mortals because they had rejected God’s Messiah. The imposter, Antiochus Epiphanes the infamous villain of Chanukah who captured Jerusalem, claimed to be a “god.” Ironically,  during Chanukah, Jesus revealed that he was indeed, “God made manifest.” Jesus was a “stumbling stone” to many of the religious of his day. They rejected him as their Messiah and wanted to stone him.

Messiah and Jerusalem are Stumbling Stones

During this year’s Chanukah season, Jerusalem is once again in the news. It has been a hundred years since the Balfour Declaration. As a result of the declaration, Jews were allowed to return to their “homeland.” It is also a hundred years from the surrender of the Turks to General Allenby. This ended  the Muslim rule of Jerusalem. And now, the United States has declared that it will move it’s embassy to Jerusalem. This has upset the status quo and rekindled historic tensions. Surprisingly, the greatest objections seem to have come from the EU, that bastion of modernism and post-nationalism. Unesco accepted the resolution last year that “Jews and Christians have no historic connection to Jerusalem.” Slowly the puzzle pieces are being assembled and prophecy is being fulfilled.

The Future of Jerusalem

In the first century the temple was destroyed and the Jews were exiled from Jerusalem. As a result, Zechariah’s prophecy seemed to be an impossibility. Yet, Zechariah had prophesied that Judah would  inhabit Jerusalem, and the city would become a “burdensome stone” to all people. The time frame of this prophecy is just before the return of the Messiah. In this century we have witnessed the return of Judah to Jerusalem.But there are many prophecies yet to be fulfilled. For those who do not believe God’s word, the Messiah and Jerusalem are stumbling stones that will lead to destruction. Yet, a time of hope is ahead for those who believe God’s word.  The Lord God will stand once again on the Mount of Olives. Rivers of living water will flow from Jerusalem. Those who rejoice at the Messiah’s return, will also understand the importance of Jerusalem.

A Vision of Zion