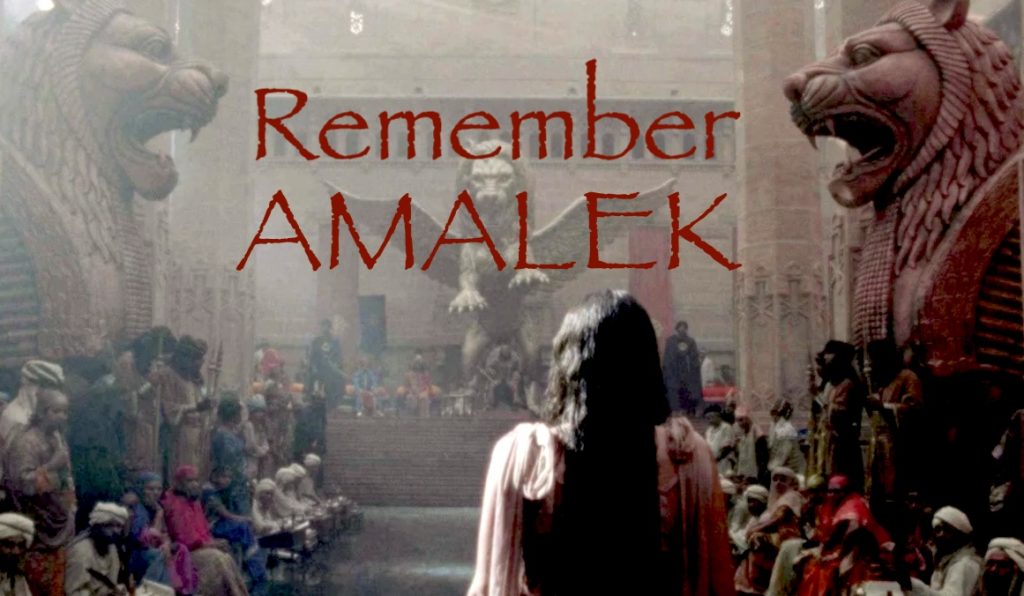 Moses in writing to the Israelites before entering their promised land, gave them an admonition, “Remember Amalek.” This brings to mind the question of who was Amalek?  Why were they to be remembered? And. how does this tie into the fact that this Sabbath before the days of Purim, is called the Sabbath of Remembrance.  Sabbath is a time to be refreshed and to renew the divine narrative in our minds. To understand Amalek we must go to the book of beginnings, for Amalek was a descendant of Esau. It was the relationship between Jacob and Esau, the sons of Isaac, revealed in Genesis that gives us the clues to understand God’s command.

History of Esau and Jacob

From before the day of their birth these two fraternal twin brothers, Esau and Jacob, were at odds with one another. And so much so, that their mother Rebecca, went to God to ask about the duel that seemed to be happening between the two. God reassured her, and prophesied that two very different nations would come from the two brothers. And oddly, the younger would dominate over the elder. Esau, was born first, and Jacob a close second with his hand grasping his brothers heal. Then time passed and Moses tells us of Isaac’s love for Esau the huntsman, and Rebecca’s love for Jacob, the herdsman. But the real issue developed when Esau returned from a hunt exhausted and famished, and asked Jacob for a portion of the food he had prepared.

This would seem a small matter, in the grand scheme of things, but in order to gain the immediate gratification of a bowl of lentils, Esau had been willing to sell his birthright. Jacob might be accused of ‘sharp dealing’ and taking advantage of his hungry brother, but God did not see it that way. Rather, God rejected Esau for having despised his birthright and the covenant promises so thoughtlessly.  And though later, we are told that Esau regretted his choice, he still did not fully appreciate God’s gift and what it meant. He had sold everything for an immediate material advantage, a short-term personal gain. He had not valued what God had to offer. So what did Esau’s descendants, the Amalekites, do to Israel, that prompted God to tell Israel to “Remember Amalek?”

Israel became slaves in Egypt when the Hyksos king of lower Egypt was defeated and a new king arose that did not know Joseph. The Israelites had begun to outnumber the Egyptians.  So they were concerned that the Israelites would join the Egyptians’ enemies and reconquer Egypt.  Eventually, through a series of miraculous events, the Lord God took pity on his people Israel and delivered them. They had passed through the Red Sea and were on their way to the promised land when Amalek attacked. The Amalekites did not engage in full frontal combat, but attacked the weak and elderly at the rear of the procession. It was a cowardly act against their own kin prompted by bitterness, covetousness, and an age-old grudge nurtured in their culture. This same vengeful, covetous attitude continued to repeat itself throughout history, and is seen even to this day in Middle-eastern affairs.

During the time of Esther and the Persian King, Xerxes, this old drama was reborn, when Mordecai the Jew refused to bow before Xerxes officer, Haman. Haman was an Agagite, of the kingly line of Amalek. The book of Esther recounts Haman’s attempt to not only kill Mordecai, but to exterminate all the Jews in Persia. But ironically, the Lord God turned impending defeat into victory for those who worshipped him. Through Queen Esther and Mordecai’s intervention, Haman’s plot was uncovered and his planned destruction of the Jews thwarted.

Paul gave us further insight into this ongoing animosity of  Amalek against the people of God. For there was more going on than meets the eye. The physical struggle was just a proxy battle for the spiritual struggle between the light of God and the darkness of the Adversary. From the beginning in Genesis, those who have been redeemed, bought back from death by the Lord, have been engaged in a spiritual war. It was a perpetual battle against those the Devil used to try to derail God’s purpose. Pharaoh, Amalek, and Haman were all real enemies of those who lived in covenant with their Creator. But, they were also symbolic of all those who would try to keep God’s people from fulfilling their mission. And the battle rages on today.

When we remember Amalek, we become aware of the dark forces in the world. These forces  are constantly warring against those who are standing for godly values. Amalek’s history reminds us of the bitterness, hatred, and jealousy that motivates those who despise God’s ways. On this Sabbath of Remembrance, we can remember God’s power to protect Israel from Amalek. We can rehearse the story of God’s deliverance at the time of Esther. For she risked her life to  confront Haman the Amalekite and save her people from annihilation. We can remember the promises of our faithful Lord, who declared that he would never leave nor forsake us. And, we can be refreshed knowing God’s promises of eternal life to his covenant people. If we remember, we will not be discouraged when the battle with ‘Amalek’ comes to us in our time.