You are here: COG Webcast > Sermons and Media > Videos > Passover — Lamb without Blemish 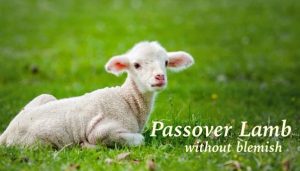 There is a great irony in the Christian world. The apostle John wrote of a similar irony in the Jewish world of his day. They claimed to know God, and yet they had lost touch with biblical truth. John wrote of Jesus’ discussion with Nicodemus about being “born of the spirit.” And much later he wrote to the brethren to help them understand what it meant to be “begotten/born of God.” John wrote emphatically that, people who have the “seed of begettal” do not practice sin! They practice righteousness.

Christian’s at Odds with Christ?

Most Christians would agree that Jesus set an example that we should emulate. They believe that Jesus loves us. And, they might even ask themselves, “What would Jesus do?”
Yet astonishingly, many Christians who say they believe the bible is God’s word, don’t believe what it says. They believe faith is more important than which faith you might embrace. Many don’t believe there is absolute moral truth. And a surprising 50% of Christians in a recent survey believe Christ was human and that he sinned. So what is the reality? Was he a “Passover lamb without blemish — or not?”

Did Jesus Sin — Does it Matter?

The scripture claims unequivocally that Christ was the “Passover lamb without blemish.”  Ancient Israel chose a lamb without blemish, whose blood saved their household from the death angel. Likewise, Christ, was the Lamb of God. He offered himself as a sin offering, to spare those who believe in his sacrifice, from the penalty of their sins — eternal death. His sacrifice alone was sufficient to reconcile all humanity to the Father. So did Christ, the Lamb of God, sin? Or, was he the perfect Passover lamb without blemish? Was he able to forgive your sins — or not? Our hope of eternal life depends upon this truth, this reality.