You are here: COG Webcast > Sermons and Media > Videos > John’s Vision of God – Worthy is the Lamb of God

John’s Vision of God – Worthy is the Lamb of God 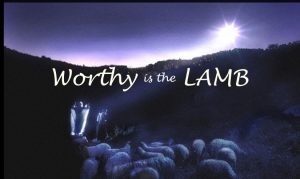 John the Baptist declared Jesus to be the Lamb of God

We have come to learn through John’s writings that Jesus Christ,  the Messiah, was the Word, the Creator, the Son of God, and the Son of Man. But John the Baptist revealed that Jesus was also the ‘Lamb of God.’ But how did he get this title, and why is it important to understand that the Lamb of God is Jesus Christ? The book of Revelation penned by John gives us a detailed description of the Lamb of God and his roles in the Father’s step-by-step plan to save humanity.
John was perplexed and brought to tears by the vision of the scroll with many seals that could not be opened until someone was found worthy of the task. But eventually, the Lamb stepped forward because he was worthy and able to open the scroll.

One God the Father, and One Mediator, Jesus Christ

Jesus Christ, the Lamb of God, had been standing between the Father and humanity. He was the Lion of the tribe of Judah, the Root of David, who had prevailed and conquered and was worthy to open the scroll. How?  As the Son of Man he had given himself willingly as a sacrifice — the great Passover Lamb — as a payment for his people. And now he was qualified to stand between God and man as the Great High Priest. Being in the midst of the throne in heaven he became an able Mediator — between believers and the Father, — of a better covenant, one that offered eternal life.

The Shepherd’s Sacrifice for the Sheep

Through the blood of the Lamb, the great Adversary had been overcome. It was by Jesus’ atoning sacrifice — his death by crucifixion — that he purchased those who believed on his power to save them. It was God the Lamb who stood and interceded between the people and the Father and was worthy of worship, honour, and glory. Through his blood sacrifice a great multitude had been cleansed and made right with the Father so they could dwell with him and serve him.  And those who overcame with Christ, became the purchased possession of the Lamb, he became their shepherd.

Jesus called himself the Good Shepherd. Peter described Jesus as the Chief Shepherd and Paul called him the Great Shepherd. And these titles all harkened back to David’s Psalm about his Lord, the Lord God of Israel, “The Lord is my shepherd.” It is Jesus the Shepherd, the Lamb of God, who gave himself for his sheep, and has the right to give them eternal life.  For those who have overcome through Christ will have their names inscribed in the “Book of Life of the Lamb.”

But the Lamb is worthy of playing another important role as judge of his people. John’s vision of  this role of the Lamb will help us understand the relationship between the Lamb of God, and  the Lord of Hosts, the God of Israel. It will also help us know why the Lamb is worthy to judge his people.
View the next video for part 2  ‘John’s Vision of God – The Wrath of the Lamb’