You are here: COG Webcast > Sermons and Media > Videos > Jerusalem — A Great Miracle Happened There

Jerusalem — A Great Miracle Happened There 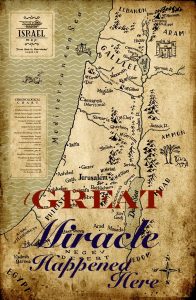 A Great Miracle Happened There

During the winter season one might think that the “great miracle that happened there” was the birth of the Son of God in Bethlehem…but is that the reality? Luke recorded in his account of Jesus life, the story of this birth to the virgin Mary. This is truly an amazing story. But many would be surprised to know that the evidence does not support a date of December 25th, nor any time in the winter. So what is that miracle that happened there, in the land of Israel, in the winter, on December 25th. It may surprise some.

December 25th is memorable , but for another reason. Daniel prophesied of a time when a despicable person would seize the Kingdom of Judea by intrigue. Historical sources document the amazing accuracy of Daniel’s words. He described the events surrounding the rule of Antiochus Epiphanes, ruler of the Seleucid Empire. It was a story of apostasy, treachery, family in-fighting, and murder. That culminated in the installation of a statue of Jupiter Olympus (Zeus) in God’s temple. When? This abomination began on December 25 — Kislev 25 on the Hebrew calendar, just as it is this year. Yet, in this time of collaborators and foreign invasion, there were those who knew their God and eventually prevailed against the overwhelming odds. The result?  “A  great miracle happened there” as the temple was cleansed and rededicated to the worship of the true God.

A Great Miracle in the Future

Jesus’ Olivet prophecy used the reality of Daniel’s “abomination of desolation” in the time of the Maccabees, to envision a future time when the people of God will once again face a time of great apostasy — a great tribulation. They will be looking for deliverance, and once again, a great miracle will happen there. Join us in searching the scriptures to understand God’s perspective, on the past, present, and future of those who worship Him in spirit and truth.