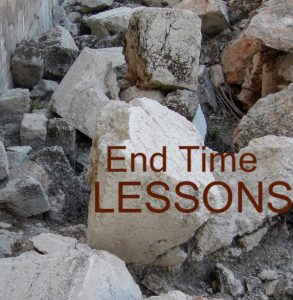 When Jesus spoke to his disciples about end time lessons for believers, they were looking at the magnificent temple. Herod’s temple was an amazingly beautiful sight. A wonder of the ancient world, its layers of blue, yellow, and white marble seemed to undulate like the waves of the sea. And yet, Jesus prophesied that it would all be destroyed. Of course, the disciples wanted to know when this would happen. Perhaps they were anticipating it to transpire in their own lifetime. But Jesus skirted the issue and related a series of events that would occur before his return. And he gave a them a warning.

Jesus told his disciples to be aware of the times and watch out for religious frauds. False teachers would cause many to deviate from the truth and wander from the path of righteousness. While claiming to represent God, they would deceive many with a message of lawlessness and disregard for God’s teachings. The culmination of this time of religious and moral degradation would be symbolized by an ‘abomination of desolation.’ When this moral horror and disgusting stench would come, then God’s people were to flee … and not look back. In speaking of this future event, Jesus was alluding to a past event. There had been a prior  ‘time of tribulation’ for the people of God.

Jesus was referring to the prophecy in the book of Daniel that would prepare the way for the first coming of the Messiah. But this would only happen after a time of great turmoil in the land of Judea. Daniel’s prophesy was fulfilled in the time of the Maccabees. God-fearing people were caught in the middle of a power struggle. Antiochus Epiphanes’ Seleucid empire and the Ptolemy empire of Egypt were contending over the land of Judea. The story was further complicated by warring factions in the Judean high priesthood. Competing brothers sought to buy favour with their Seleucid overlords by adopting Hellenism. Many among the Judean elite saw the advantages of becoming a Greek polis with all its cultural and economic advantages.

This apostasy and assimilation of the leadership into Hellenic society, angered the populace. And, pushed those who valued God’s ways and biblical teachings into open rebellion against the Seleucids. Antiochus Epiphanes’ response, as self-proclaimed ‘god made manifest,’ was to squelch all opposition. He tried to eliminate the scriptural practices of Sabbath, circumcision, or dietary laws on pain of death. But, as Daniel prophesied, there would be those who would continue to revere God and stand up for the truth. Though many would be deceived and caught up in the religious deception of the time, the few would remain loyal to God. And to those faithful few who were written in the book of Remembrance, the reward would be eternal life.

End Time Lessons – The End of the Age

Jesus likened the time memorialized by Chanukah, the time of the Maccabees, to the end of the age scenario. In a future time of religious confusion and a famine of the word of truth, there will be those who will shine God’s light. These wise disciples will continue to lead many into righteousness in spite of opposition. In these times many will betray and kill one another, and yet Jesus encourages his followers to endure and be his witnesses . He tells them to stand for the truth and pray for strength and patience to persevere. We can accomplish God’s will in times of tribulation. We must remember that God’s words are sure and will not pass away like the political regimes of men.

Instead of being overwhelmed by the uncertainties of human life, God tells us to put on his armour, so we can stand in the evil day. As those who faithfully went before us, we can shine as lights in the darkness. And in doing so, we will be assured of our reward, everlasting life.