You are here: COG Webcast > Sermons and Media > Videos > The Wave Sheaf – Symbol of our Messiah

The Wave Sheaf – Symbol of our Messiah 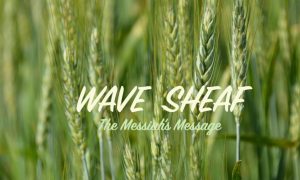 The Wave Sheaf and the Son of God

Paul was eager to preach the gospel, and in doing so he helps us understand the message of the wave sheaf. He wanted everyone to know the reality of the Messiah. For what he had witnessed had given him confidence that Jesus was indeed the Christ, the Messiah. And it was through the Messiah that all people would experience ‘salvation’ and the hope of eternal life. And yet, as we read the gospel account of John, Jesus plainly said that though he was a king, the Son of God, his kingdom was not of this world. As a result the Jewish leaders went to Pilate to demand that Jesus be crucified for blasphemy, as he equated himself with the Lord God of Israel.

Amazingly, the efforts of the Jewish leaders in bringing Jesus before the Roman authorities aided in fulfilling the prophecies about Jesus.
When we read the gospel accounts of Jesus’ crucifixion and death we note the many ways in which these events confirmed his Messiahship.
Though he suffered crucifixion, he died from his side being pierced, his bones were not broken, and lots were cast for his cloak as the Psalmist had foreshadowed. Jesus in witnessing to the Pharisees said the only sign he would give them was the sign of Jonah. So do you believe Jesus’ testimony about his Messiahship? Did he fulfill the prophecies? Was he symbolically our wave sheaf?

Chronology of Passover Proof of Messiah

Many in the Christian world celebrate the Good Friday, Easter Sunday scenario, but this does not confirm Jesus’ prophecy! When we look into the scriptural account we see a very different timeline.
Jesus ate his last supper with his disciples on Tuesday evening, the beginning of the 14th day of the first month, Abib. That night he was brought before the High Priest, eventually taken to Pilate and scourged. The next day he was crucified, so that he died on the 14th just as the Passover lambs were being offered in the temple.

He was put in the tomb by Joseph or Arimathea late on the 14th just before the Holy Day (annual Sabbath) began at sunset. Then the whole community rested on the Holy Day. On Friday the women went to buy spices, then rested again on the weekly Sabbath. Finally, on the first day of the week they returned to find the tomb empty!

The actual chronology of the biblical accounts is evidence of Jesus having been in the tomb three days and three nights. He was in the tomb Wednesday late afternoon before sunset and left the tomb late Saturday (Sabbath)afternoon just before sunset. Paul was convinced that Jesus was the Messiah for he fulfilled the prophecies. But even more, Paul had a personal experience talking to the resurrected Jesus. Like Mary and all of the other disciples, Paul knew from personal experience that Jesus had risen from the dead! And, he had fulfilled the symbolism of the wave sheaf … so what did that mean?

Christ, Firstborn of Many Brethren

Paul explained to the Romans that Jesus was the firstborn among many brethren, like that first sheaf of grain in the first harvest of the year. The wave sheaf was offered on the first day of the week, just as Jesus after his resurrection was “offered” to God the Father on the first day of the week. And this wave sheaf offering set in motion a whole series of events, leading to a physical harvest that would be completed by the day of Pentecost. But the greater reality was that the wave sheaf was a foreshadow of a spiritual harvest of humanity.

The Psalmist declared that the Messiah would proclaim God’s (the Father) name to his brothers and sisters. Is it mind-boggling to consider this reality, that we as followers of Jesus Christ become his spiritual siblings? And yet that is the message of the wave sheaf. Having become a human being by relinquishing his divine nature, the Lord lived, suffered, and died in order to reconcile us to the Father. He was the first of the firstfruits, the wave sheaf, and his purpose was to bring many children to the Father.

So now, all those who have been baptized into Christ share the same Father. And as a result an awesome future awaits those who faithfully follow in the footsteps of their elder brother. Now that the Lord Jesus Christ has come and fulfilled his role as the wave sheaf, he has paved the way for his brothers and sisters in the faith. God the Father and the Lord Jesus the Messiah are preparing now for that first glorious “harvest of children” the firstfruits of the Kingdom. Will we be ready?

Learn more about your awesome future as a child of the Father.