You are here: COG Webcast > Sermons and Media > Videos > Thankfulness in Tough Times 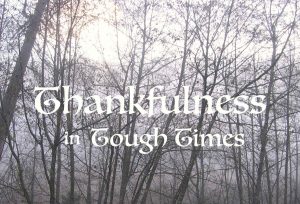 The Protestant Reformation transformed lives and eventually nations. But it also brought conflict and confusion. Yet many reformers set an example of thankfulness in tough times. In search of the “faith once delivered,” some reformers wanted to return to the authentic worship and beliefs of the early first century church. The Separatists among them valued the decalogue, insisted on adult baptism by immersion, and followed the biblical examples of anointing and ordination. They anticipated the return and millennial reign of Christ. Some courageous non-conformists braved the rejection of society and began keeping the Sabbath, in spite of dire consequences. In a time of strong anti-semitic bias and prejudice they endured persecution and even execution, at the hand of those who insisted on religious uniformity.

Finding a Place of Refuge

Some of the Separatists and Non-conformist Christians found refuge in the new world. Their’s is a story of thankfulness in tough times. One couple, Steven and Ann Mumford, sailed for Rhode Island in the hopes of escaping the religious discrimination in England that had made life increasingly difficult. Rhode Island’s governor had provided a safe haven for these religious refugees with the creation of a Charter in 1663 that guaranteed freedom of worship. Over time the Mumford’s and others established the first Sabbath-keeping congregation in the colonies. Their efforts created the legacy upon which the modern Churches of God have been built.

David, a man after God’s own heart, provided an important example of thankfulness in tough times. His Psalms consistently reaffirm David’s hope in God’s deliverance. He faced determined foes, family betrayal, and painful isolation. Yet, he remained constant in his faith that God would “deliver him from all his fears.” David’s thankfulness in the midst of trial, recalls that of Paul. He also, was able to boast in his weakness. Paul understood that God’s power is often best seen in times of human weakness. Like James, Paul believed in the transformative power of enduring faithfully through tough times. And in his thankfulness for God’s deliverance he declared “When I am weak then I am strong.”*

View more videos and articles to learn about God and his teachings from the ‘sola scriptura’ perspective.
It is God’s spirit that leads us into all truth as we read his word.