You are here: COG Webcast > Sermons and Media > Videos > Preparing for Passover — New Insights about Paul and Passover

Preparing for Passover — New Insights about Paul and Passover 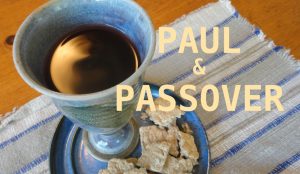 Paul’s Testimony about Passover is something that even atheist and agnostic scholars acknowledge as solid historical evidence of Jesus’ life and ministry. At this time of year it is important to consider the foundation of our faith as Christians. So it may come as a surprise that even secular historians give credence to the veracity and trustworthiness of the gospels and Paul’s writings. Scholars support the eye-witness reports of scripture as authentic accounts of historic events. So let’s consider Jesus’ life, death, and resurrection as recounted by these faithful witnesses.

Luke, Peter and John all created written records of the events surrounding the Passover season. They gave testimony as eye-witnesses who could attest to the facts as they witnessed them personally. But there were also secular historians of that time who corroborated the historicity of the scriptural writings. Josephus, the Jewish historian, wrote of James the brother of Jesus who was falsely accused and stoned to death. Tacitus wrote of Nero’s mad obsession to scapegoat those who believed in Jesus Christ and blame them for the fire that Nero had perhaps instigated. But so great was the Christian’s devotion that they would rather die than renounce their faith in Jesus. Pliny the Younger in a letter to Trajan expressed his surprise that the Christians, even on pain of death, would not relinquish their belief in Christ.

Paul’s books to the Romans, Corinthians, and Galatians are all considered to be reliable primary historical sources. Paul made it clear that he was writing down what he had been given by Christ. And he focused his letter to the Corinthians on what he considered was most important. He assured them that Jesus was the prophesied Messiah. For he had fulfilled all of the detailed prophecy of Isaiah. For Jesus had died without descendants. And though he had not sinned he still suffered a criminal’s death. In offering his life he had borne the sins of many and made them ‘righteous’ in God’s sight. And Jesus had been raised, resurrected, after 3 days. Thus fulfilling the prophecy in Luke and Matthew’s accounts that Jesus would be in the grave 3 days and 3 nights. Just as Jonah the prophet had been 3 days and 3 nights in the belly of a fish.

And, Paul confirms that he was not the only eye-witness to Jesus’ life and death. There were the disciples and at least 500 others who had seen Jesus’ after his resurrection. Most of them were still alive as Paul wrote and could attest to the facts as eye-witnesses of this great event. So when we consider Paul’s instructions to the Corinthians regarding Passover, we can be confident that he spoke with authority.

Paul and Passover Instructions to the Corinthians

In writing to the Corinthians, Paul was concerned about the problem of divisions and factions. So he wrote to clarify the instructions regarding how the Gentiles were to observe the Passover. These instructions were ones that Paul had received directly from Jesus. The bread and wine were to be taken once a year according to the custom in remembrance of Jesus’ sacrifice. It was not a Passover meal, for that would happen the following evening in each family’s home.  Nor was it the “Lord’s Supper,’ rather the brethren were to eat at home before they came together for the Lord’s Passover – New Covenant Passover. This would avoid issues that had arisen due to the social disparity within the congregations.

Paul’s advice was for the brethren to examine themselves, to look into their heart and soberly evaluate their relationship with the Lord. Passover was a time for self-reflection and an acknowledgement of personal weaknesses and errors. It was also a time to eliminate distractions and make changes. In preparing for Passover, Paul wanted the brethren to have a high regard for Jesus’ sacrifice, his role as their high priest, and future king. In this manner, they could partake of the Lord’s Passover worthily, in a manner befitting the occasion. Paul reminded them that the Lord is their judge, but his purpose in disciplining his people is to ensure their safety. He does not want them to be destroyed, but to share in his family inheritance and eternal life.

The message of Paul and Passover is one of God’s love for his people, his children. At this time of year we honour the Lord Jesus Christ for his willingness to pay the ultimate price to demonstrate his love for his brothers and sisters. So let’s celebrate this yearly memorial as Paul instructed. We should commemorate the Lord’s Passover with the symbols of the bread and wine, and a thankful heart for God’s mercy, and our hope for the future.

Learn more about the spring festival season for Christians:
http://cogwebcast.com/events/passover-and-the-days-of-unleavened-bread/