You are here: COG Webcast > Sermons and Media > Videos > Murder and the Greater Good — the Sixth Commandment

Murder and the Greater Good — the Sixth Commandment 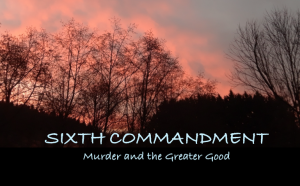 Murder, Passover, and the Messiah

When is it murder? Is it OK to kill a few for the greater good of the many? This is a good question for the beginning of a new sacred year, and the approaching Passover season. The New Covenant Passover (Lord’s Supper) with the bread and wine symbols, as observed by Jesus’ disciples, anticipated the Messiah’s death — his murder.
Do you know what the scriptures reveal about this important topic, addressed simply in the commandment, “You shall not murder.”

The Passover, seder, also involved a blood sacrifice, the killing of the lambs in sacrifice, prior to the deliverance of Israel from Egypt. The blood on the doorpost symbolized the Lord God’s intervention as Saviour. He would save his people from the angel of death that would kill the Egyptian firstborn. Both of these Passover observances were understood by the early Christians to point to the truth that Jesus the Saviour was indeed the prophesied Messiah. Jesus was the Lamb of God, and the I Am, who would give himself willingly as a sacrifice to pay the death penalty in the stead of all those who would accept his sacrifice.

The Word of God and the Truth

In John’s account Jesus, the Word of God,  testified to the fact that he was a king, and his word was true. Only those who listened to the Word of God could know the truth and have the hope of eternal life. The world of the first century and its ruling elite, did not know the truth. They were in a culture where murder in many forms was commonplace, and they could not see the disastrous consequences of their lawlessness that Jesus foresaw and foretold. For, the Messiah heralded the end of the corrupt age of man that would collapse and disappear, and the coming of a new age under his reign as King of Kings.

For those living in a culture of death like that of Roman society, with its slavery, infanticide, and brutal to-the-death competitions, Jesus’ words of life provided hope. Those who followed Christ could pattern their lives after his example.They could be forgiven of past sins, and empowered to live by every word of God. Through keeping his commandments they would come to an ever-greater knowledge of God’s love and eventually become perfect as he is perfect. Jesus’ sacrifice, his death, could give them hope of eternal life. But, they had to stop sinning and do what was right.

So when it comes to the sixth commandment, what is the right thing to do? This commandment tells us that all forms of premeditated, unjustified, taking of another human life is murder, and there is a penalty for murder. Every sin has a consequence and we cannot avoid reaping what we have sown. So, as far as the present Covid vaccination dilemma goes, is it OK to cause harm for the greater good?

Even the Hippocratic oath, the ethical code adopted as a guide of conduct by the medical profession, speaks to this issue. If you are in the medical profession your duty is to help, and do no harm. To understand the magnitude of the dilemma that is confronting medical staff, and consumers alike, we need to know the reality of the situation.  Let’s consider a few facts first, from some reliable government sources. As of February 21, 2021 in the UK, statistics show that there were 460 vaccine-related deaths from the two Covid vaccines listed in the survey. The number of vaccine injuries in this report were over 200 000. In the United States as of March 4, 2021 there were 1 637 vaccine-related deaths.

The Price of Blood Guilt

These statistics are certainly unacceptable for those who want to honour their oath as medical practitioners. But more importantly, “What does God have to say about these numbers?” Shortly after the flood, when the Lord God had destroyed the violent murderous pre-flood society, he gave Noah his advice. The penalty for intentional murder was capital punishment, whether the motivation was hatred or love. From God’s perspective, blood guilt is incurred by all murder, including abortion, euthanasia, or mercy killing. And a penalty will be paid by the society that engages in these forms of murder.

The Passover story speaks to this reality. When the Egyptians murdered the Israelite male babies by throwing them in the Nile, it was because they feared the changing demographics as the Israelites began to grow in numbers. But the whole society paid a price for their blood guilt, when God sent the death Angel to slay the Egyptian  firstborn, and free the Israelite slaves.

Murder One to Save the Many?

The Passover season also reminds us of the events surrounding the murder of the Messiah, and the penalty for that murder. After Jesus had performed an incontrovertible miracle by raising Lazarus from death, the religious leaders in Judea were concerned.  They were fearful of losing their positions of prominence in society and of the reaction of their Roman overlords. In response to the perceived threat that Jesus presented, Caiaphas, a leader among the Pharisees, said that one man should die so the whole nation should not perish.

Jesus had predicted this eventuality in recounting the parable of the vineyard. This was a story of farm workers who killed the son of the owner in order to take over the vineyard for themselves. Pointedly, Jesus looked at the Pharisees, and they recognized that they were being cast as the murderers in the parable. Their intentions were anything but good, but even  ‘good intentions’ can never excuse the murder of an innocent man, from God’s viewpoint.

So, the truth is that God is not OK with killing some for the supposed greater good of the many. You cannot do evil that good may come.You do eventually reap what you have sown, and evil deeds reap evil rewards. Christ predicted that as the result of the murder of the Messiah, the Pharisees would lose their position anyway, and their society would be destroyed. This became the reality in 70 AD during the first Jewish Revolt, when the Romans destroyed the temple state, and killed over a million Judeans.

Truth and Consequences of Murder

As followers of the Messiah we have choices to make. Passover is a time of self-reflection, of looking into the mirror of God’s law. We cannot be involved in cultural or medical practices that, like a game of ‘Russian roulette,” will surely murder some individuals. We must be doers of God’s word, and not be caught up in the fears of our time, as the Egyptians or the Pharisees were in their time. Christians who take their calling seriously will examine themselves, to ensure that they are not supporting, aiding, or abetting the practice of murder in all of its euphemistic modern forms. God’s people will heed his commandments, and follow the lead of Jesus Christ, for he will lead us in the truth, and direct us safely towards eternal life.