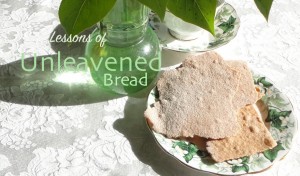 If we know the biblical accounts, then we know this is a time when our spiritual ancestors would have been leading unleavened lives. For they had physically removed the yeast of leavened bread from their homes. But, the Christian world is divided when it comes to how to celebrate or remember the events that the bible recounts at this time of year. Most conventional Christians embrace the Good Friday – Easter Sunday tradition. If they think about it at all, they may consider Passover, and the idea of eating ‘unleavened bread,’ matzah, as quaint Jewish customs. But in favouring tradition over ‘sola scriptura’ believers are missing important lessons that we are told to remember. So how did our spiritual ancestors worship and what insight did this give them?

Paul in writing to the Corinthians reminded them of their spiritual heritage. He had instructed them to ‘put out the leaven’ in accordance with the Lord God’s instructions in the book of Exodus. For even though Gentiles by birth, they had become part of God’s people by baptism. But there was a problem. They had removed the physical leaven from their homes. But, they were not leading unleavened lives. They were ‘leavened’ by tolerating sexual sin in their midst. And Paul knew, that like leaven, a little spiritual corruption could become pervasive. And in time that leaven of sin could destroy the whole congregation. Paul’s advice was to remove the leaven of malice and vice, by leading unleavened lives in sincerity and untainted truth.

The Problem with Leaven

Jesus warned his disciples of the danger of ‘spiritual leaven’ and following the hypocritical example of the Pharisees. The religious leaders of the time may have appeared pious. But, Jesus decried them as ‘blind guides’ who would lead people astray. How would they do this? The Pharisees were adept religious showmen who made a point of keeping the law to look good. And many people were taken-in by their showmanship. But Jesus’ confronted them, calling them ‘play actors,’ whose outward show concealed a spirit of murder, and a jealous self-indulgent heart. For in reality they were lawless and hostile to God and his laws, specifically the principles of justice, mercy, and faith. Jesus counselled them to be clean from the inside out. And not merely whitewashed tombs that looked good on the outside, but were spiritually dead inside.

Paul’s Teaching to the Gentile Christians

Both Paul and Peter reminded Christians that they were God’s temple, a place for his spirit to dwell. So they needed to be pure from the inside out. Eating unleavened bread at Passover, was symbolic of leading unleavened lives. This was to be accomplished through God’s spirit of love. So that as obedient children, they would be faithful workers, pure and virtuous. Having been redeemed from death by Christ’s sacrifice, Christians would embrace a new way of life free from deceit, hypocrisy, and jealousy. This was going to be a life-long mission, to put on the mind of Christ who led a sinless, unleavened life. And there would be obstacles to overcome.

Hypocrisy and the Leaven of Balaam’s Way

John’s book of Revelation highlighted one of the pitfalls that would challenge believers’ sincerity in leading unleavened lives. Jesus sent a Message to Pergamos, that ancient religious centre with temples devoted to the worship of Zeus, Dionysius, and Caesar. Jesus “knew where they dwelt,” for the believers lived in the midst of a world of religious confusion. His concern was that the believers were being negatively influenced by the teaching of Balaam. Balaam’s philosophy was a ‘do your own thing’ style of worship, that was indulgent and offered ‘freedom’ from the law of God. Of course, Jesus’ prophetic message rings true today. For there are many religious teachers who preach a message of love and a distorted grace. This message, like Balaam’s, encourages people to ignore or reject God’s instructions in favour of personal freedom of religious
expression.

Jude adds to John’s observations, noting that those who follow Balaam’s way, are caught up in sensuality, and despise outside authorities. They have become their own authority on what is acceptable behaviour. They are no longer leading unleavened lives according to the scriptures, but are caught up in their own emotional and philosophical religious ideas. Balaam’s story is recounted in the Book of Numbers.

Balaam did not want to provoke God directly by prophesying against Israel, as God had forbidden him to do so. Yet, Balaam really wanted the rich reward offered by Balak the King who wanted Israel destroyed. Balaam put his self-interest above God’s interests. So in his insolence and self-will Balaam looked for an angle — a way he could circumvent God’s direct command. He was okay with keeping the “letter” of the law while violating the spirit of the law, motivated by his greed and lust for wealth and status.

Avoiding the Pitfalls of Self-Indulgence

Balaam wanted his own sweet way! So he found a way around God’s command, by counselling Balak to incite Israel to commit sin. He encouraged Balak to send women into the camp of Israel to entice the men into sexual sin and worship of their god, Baal-peor. As a result, the people of Israel reaped what was sown by their sexual indulgence and were punished for their disobedience. Christians can get caught up in conniving deceitful behaviour like Balaam. And they can cause others to stumble by inciting them to be unfaithful and disobedient.

Or, they can be like the ancient Israelites, naively believing Balaam’s message. Assuming erroneously that it is okay to disobey God, and there will be no consequences for spiritual leaven in their lives. Scriptures tell us to think carefully about the story of Balaam. We should consider whether we are like Balaam, and the Israelites who disobeyed God. Or are we like Phinehas who had a passion for God’s ways and stood up against the tide of lawlessness and sensuality?

Passover and unleavened bread remind us to root lawless behaviour out of our lives. For we are God’s chosen people, chosen to be holy — leading unleavened lives. We need to be aware of Balaam’s tricks, and the negative impact of focusing on the things that the world values. Having been called into God’s light, and leading unleavened lives, we can show others the goodness of God. This is a key lesson of the Passover season and now is a good time for some self-reflection. There are great benefits, rewards we can reap, in our own lives and the lives of family and friends, if we commit to leading unleavened lives all year long.