You are here: COG Webcast > Sermons and Media > Videos > Dealing with Deception – Do you know the Devil’s Devices?

Dealing with Deception – Do you know the Devil’s Devices? 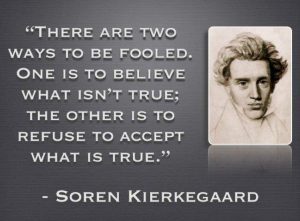 The Tree of Knowledge

We first meet the Devil’s devices in the garden of Eden. There he sowed doubt in the minds of Adam and Eve with his crafty insinuation. “Is it true that God has said…” He first undermined their trust in God as a God of truth. Then, he appealed to their desire to be wise and live forever, with the infamous, “You shall not surely die!” As the Father of lies he obscured the truth that only God could give eternal life as a gift. And though it was ‘true’ that the tree of knowledge would ‘open their eyes’ and give them knowledge, he used this to deceive. Their adversary also knew the ultimate outcome of eating the fruit of that tree would be death.

Are we as aware as we should be of the Devil’s devices as they have been re-envisioned in our world. Or do we buy into one of his finest lies, “The devil? Naw, he doesn’t exist.”

Jesus’ example should convict us of the reality of the Devil’s devices. The Tempter appeared to Jesus and challenged him on his identity with the taunt, “If you are the Son of God…?” Likewise, he may test us, getting us to doubt or question our identity as God’s children, called by his name, and given the promises of a future with God. Paul warned of such deception in speaking of the cunning of the ‘Serpent’ who is able to seduce us away from devotion to God through sowing doubt and delusion. Our adversary is a master of the half-truth, a clever combination of truth and error. Perhaps you have had to battle this negative inner voice of doubt and deception.

Deceivers and their Deceptions

Peter also warned the brethren of false teachers who would use the Devil’s devices and twist scripture to lure unstable people into sin. With clever arguments they would boast about their ‘freedom’ to ignore God’s commandments. But the end result of their deceptions was to lure people into the slavery of sin — breaking God’s laws and ignoring his teachings. Just as their Father the Devil deceived Adam and Eve, with the promise of ‘wisdom,’ so these false apostles teach worldly wisdom that will only lead to death. Isaiah wrote of these people who call evil good and good evil, and are wise in their own opinions. But the reality is that they do not know God. In fact they will teach the lie that God accepts evil-doers, and there will be no natural consequences for evil actions. But we are warned to avoid these false teachers who use the Devil’s devices of substituting darkness for light.

The great liar deceives people by denying Jesus is the Messiah. How? By the twisting of scripture and replacing the truth of God with a lie. Do you believe what Jesus actually said about his death and resurrection? Did he really spend 3 days and 3 nights in the grave? Much of the Christian world denies this with their traditional Good Friday/Easter Sunday scenario. So truth is lost to tradition and in doing so, an illusion replaces reality. But there is an antidote to illusion and that is the Word of God, the Word of truth. It is only embracing the truth that we can effectively counter the Devil’s devices. The tree of life was symbolic of truth — the reality as God created it. God encourages his people to grow-up and no longer be easily swayed or deceived. We do this as we believe the truth, then live the truth, and finally are able to teach the truth that scripture reveals.

The Battle for Your Mind

There is a great battle between truth and deception, and our world is evidence of Satan’s effectiveness in deceiving the whole world. But we are directed to love the truth and study God’s word so we can discern truth from error. We are encouraged to test the spirits and reject the false prophets. We are commanded to use God’s spirit to love God and keep his commandments. If we do these things we will not fall prey to the Devil’s devices.