You are here: COG Webcast > Sermons and Media > Videos > Armour of God – Forewarned is Forearmed

Armour of God – Forewarned is Forearmed 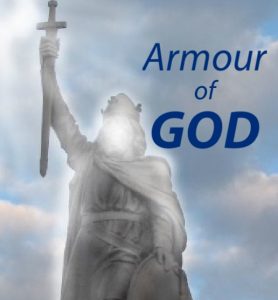 It is challenging to be a Christian in 2020! Do we have the armour of God to help us? We live in a world that, as Paul said, has been enslaved to a dark lord for millennia. John’s writings in the book of Revelation envisioned a future age, our age. There will come a time in which a great evil power will control the whole world and deceive its inhabitants. And yet, there was hope, because Christ will return and his kingdom will finally be established. And how will the evil empire be defeated? By the blood of the Lamb, Jesus the Messiah, and the sacrifice of those who had sworn allegiance to him. God will have his Christian soldiers, but their warfare is not on the battlefield.

Christ’s Warriors and their Weapons

Christian soldiers are those who have been given a new life, and the courage and resources to endure as lights in the darkness. Since a Christian’s lifestyle is often at odds with that of the society around them, life can be a series of running battles. For there are never-ending conflicts with the adversary and foes both domestic and foreign. But Christ is returning as a warrior king to destroy the wicked, and it is those who are faithful to him that will join him in spiritual battle. And, though we must do battle even now, our weapons are not the same as those of the world around us. We need the armour of God.

God gives us what we need to prevail in battle. He provides a full complement of all the defensive armour and offensive weapons that we need for spiritual warfare. Christ our commander encourages us to meet the enemy and stand our ground. We must continually wear our spiritual armour and follow Christ’s orders with unflagging steadfastness. We do not fight as the world fights for we see the spiritual reality. God’s weapons are able to destroy human reasoning and counter false philosophies. They help us to discipline ourselves so we can bring every thought into captivity. And they give us strength to take courage and not be overwhelmed by our fears.

The armour of God, that the Lord of Hosts provides, is perfect, complete, and essential to our resisting the enemy and overcoming. That is why we must put on all the armour of God so we can stand firm in our spiritual battles. Do you know the weapons at your disposal?