Some valuable information that those who value the Hebrew scriptures can appreciate. We elaborate upon the biblical principles found in both the Hebrew and Greek scriptures in  our article that explains the sola scriptura approach for Christians (Holy and Clean) 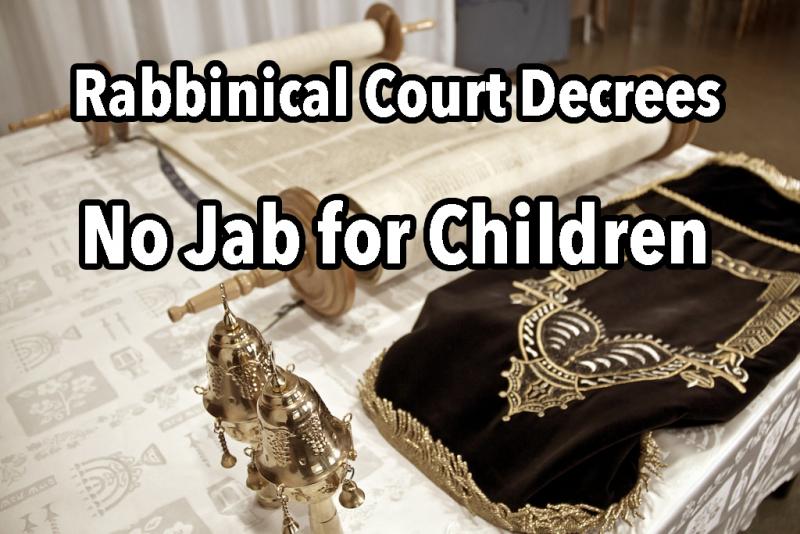 By the grace of the Alm‐ghty

Official translation of the Halachic delineation

rendered and signed on the 22nd

of Marcheshvan (after hearing eight hours of

testimony from experts and other

We the undersigned convened together to render judgement regarding the new “Covid 19 vaccine” (which we shall henceforth refer to as “injection”, “vaccine”, or “mRNA”, although our intention is to include the “Adenoviral vector DNA” vaccine as well), and we heard testimonies from experts whose expertise is in this field.

We also heard from doctors who invented and manufactured the mRNA, who testified as to its function (most doctors in medical practice are not experts in these matters at all, and from our experience and as is well‐known, they merely relate the information provided to them by the NIH, CDC, etc.).

They illustrated to us the profound danger and harm inherent in this new technology. They showed us how the governmental agencies and the pharmaceutical companies deny this fact, and how they conceal the data, making it so difficult for the public to realize the severe adverse reactions and mortalities that have befallen so many people who received the injection.

We were also made privy to how they withhold the said information through various means, preventing the injuries and deaths from being publicized by the media or on the internet, as known.

We also heard testimonies from our fellow Jews who suffered injuries, and even worse Heaven forfend, and also how this injection is harmful to procreation and fertility. And most importantly – we heard how there are tested and simple medications that have been successful in treating this disease, yet the governmental agencies have denied this, and even outlawed the said medications, doing everything they can to promote fear, not health – despite the fact that they themselves were aware that these medications work.

And now they have approved the mRNA for children as well – for whom it is universally known and is accepted fact that the disease presents no risk of danger – and their intention is to mandate the injection for children as a requisite for attending yeshivas and religious girls’ schools, Heaven forbid.

Therefore, we hereby express our rabbinic decision, as per the teachings of our holy Torah – a definitive Halachic ruling:

It is an explicit obligation to protest against this mandate, and anyone who can prevent the injection from being forced upon our youth must do so, forthrightly and emphatically.

The above admonition is in addition to the otherwise Halachically reprehensible nature of the injection:

1) due to its Halachically problematic ingredients;

2) due to the fact that no one is liable for the possible damages caused by the injection, unlike most other contemporary medical treatments and therapies; and

3) because administering the injection to one’s child assists the

government in forcing other children to take it as well.

Included in this are all healthy adults who are of child‐bearing age – they too should stay away from the said injection. (There are many reports of women who do not stop bleeding for many months as a result of taking the injection, making it impossible for them to achieve ritual purity, Heaven forbid.

And for men, there are many reports of the injection leading to deficiencies in potency, Heaven forbid).

We have been advised that the product label for the Pfizer injection states “Available data on COMIRNATY administered to pregnant women are insufficient to inform vaccine‐associated risks in pregnancy.” We have also been advised that the CDC is conducting studies where there is an “urgent need” to study the effect of the vaccines in pregnancy. We have been further advised that the product label for the Pfizer vaccine states that it has “not been evaluated for the potential to cause carcinogenicity, genotoxicity, or impairment of male fertility.”

We consider that the risks inherent in these statements are Halachically unacceptable.

3)For older adults and the elderly, further clarification is needed (but as mentioned above, there are efforts to obscure the data, and it is presently difficult to attain accurate clarification). However, practically we have seen breakthrough cases, indicating that there is no substantial difference between those who received the mRNA and those who did not. The number of Covid patients are about the same, comparatively, in both demographics.

It has also come to our attention, thanks to the testimony of an attorney who closely monitors the promulgation of misinformation, who showed us how to interpret the true reality and frequency of injuries and mortalities from the data being shared. It should be known that much of the data the government agencies report is deceitful. For example, a Covid death that occurs in a person after receiving the injection, if it happened within fourteen days of receiving the injection, is listed as an “unvaccinated” death. For the sake of brevity, we will not go into further particulars; but let it suffice to say that there are more examples of this gross misrepresentation. In order to ascertain the truth and arrive at accurate findings, we really must examine the matter further – to the best of our ability.

Alternatively, there are many injuries and risks involved which can reasonably be suspected as having been caused by the injection for adults and senior citizens as well, for we have witnessed many elders who passed away shortly after receiving the mRNA.

Therefore – it is best to err on the side of caution and abstain from taking the injection, rather than endangering one’s life by performing an action that can engender immediate and direct harm. Especially since there are other medical treatments that work, as mentioned, and that are not harmful. It is also proper to emphasize the importance of using the treatments very early, which has been shown to enhance their effectiveness.

In addition, we cannot understate the importance of becoming more educated about the true facts – for example, by watching the testimonies – and in this way, assuaging the fear which has overtaken so many.

4)We have heard testimonies from individuals and from experts in the medical field, suggesting that it may be dangerous for pregnant women to be around people who have had the injection. This can be due to a phenomenon called “shedding,” as it pertains to some types of vaccinations and gene therapies as discussed in the FDA’s guidance on shedding from gene therapies.  It is unclear whether it applies to the gene product only (the spike protein) or also to the genetic message (the RNA or the adenoviral vector). It is unclear how long the shedding might be taking place – i.e. how long a recipient of the injection can affect a pregnant woman by being in her proximity. Hence, it is best to err on the side of caution – a minimum recommendation of distancing oneself from a pregnant woman for at least two weeks after receiving the injection is strongly suggested (although some have suggested that the effect may last up to ten months, or may even be indefinite).

5) The prohibition (Leviticus 19:14) of putting a stumbling block in front of a blind person – i.e. assisting or enabling a person to violate a transgression – includes verbal encouragement, offering monetary incentives or other bribes, verbal pressure or actual threats, to coerce employees, etc., to receive the mRNA.

In all the above, we only taken into account the tragedies that have already befallen our community members – not long term effects, premonitions and frightening forecasts expressed in many of the testimonies we heard.

May the Alm‐ghty save us. May the One who said “enough” when creating the world – say “enough” to our suffering.

Rav of Chelek Levi, Beis Hamedrash of Serentch, and head of the