You are here: COG Webcast > Blog > Obama versus Putin: Whose Getting the Worst of It?

Obama versus Putin: Whose Getting the Worst of It? 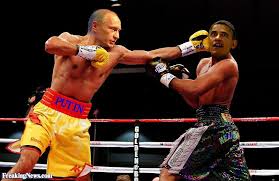 American President Barak Obama just can’t seem to deliver a TKO on the Russian President Vladimir Putin can he? In fact, for the last year it has seemed that Putin can go the distance in the ring with whatever Obama throws at him. The unipolar world in which the United States of America is the sole superpower that can get its way in whatever it wants… is disappearing before our very eyes. Nobody could really stand-up to the power of the U.S.A.’s displeasure in order to shelter NSA whistle-blower Edward Snowden with all his revelations of American surveillance of everyone’s 27/7 digital communications…but Putin was willing to take Snowden in…