You are here: COG Webcast > Sermons and Media > Videos > What Makes for a Good Leader?

What Makes for a Good Leader? 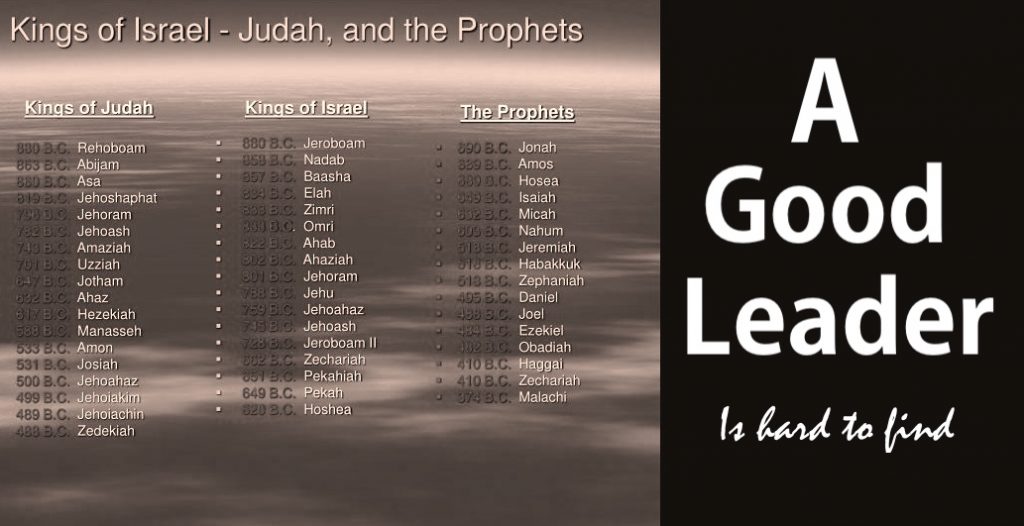 Good Leaders are Hard to Find

God was a Good Leader and he had chosen Samuel to judge his people! But when the people saw that Samuel’s sons were not godly men and used their position as judges to take bribes, they petitioned Samuel to give them a king. Israel had lived under a theocracy for several generations. God was their leader, the law of God was their constitution, and God gave them judges to guide them. But now they wanted to be like all the other nations. God’s response was to give them what they wanted. But, he also gave them a warning. He told Samuel to tell the people the consequences of having a king. For a good leader was hard to find.

Knowing the nature of humanity, God predicted that Israel’s kings would draft the sons of citizens into military service, and take their daughters as servants. The kings would also take their land, their harvests, and their vineyards. The prophecy became a reality in the time of Naboth when Ahab the king offered to pay to buy Naboth’s vineyard. According to the constitution established by God’s laws, a family’s inheritance in the land could be leased but never sold.

So when Naboth refused to sell his inheritance, Jezebel, Ahab’s wife, had a solution. Using the ‘legal system’ of the day, Jezebel coerced local government officials in the community to hire false witnesses, and rig a judicial hearing. They pronounced Naboth guilty of blaspheming, and then had him stoned to death. Once Naboth was dead, Jezebel encouraged Ahab to take the vineyard as his own. And he did. Unfortunately, this kind of political skulduggery has been common throughout the ages. It is hard to find good leaders. There are so few who do not selfishly put their own desires ahead of the needs of the people.

Seeing that the people were adamant about having a king to keep them safe and secure, Samuel continued his warning message. The king would take taxes of all their produce, and ultimately everyone would become a slave of the king. God predicted that they would beg for relief once they realized they had traded their liberty for ‘safety.’ For a human king really had no power to guarantee their security. Their first king, Saul, was initially a good leader, following God’s instructions and leading them in battle against foreign oppressors. However, over time he began to pander to the people, neglect God’s directives, and became motivated by jealous rage. The next king, David, a man after God’s own heart, was a good leader at times. However, he too was not without sin, and had to repent of his abuse of power.

Solomon, David’s chosen successor, began well as he looked to God for wisdom. God blessed the nation, and the temple was built under Solomon’s direction. This building was as one of the architectural wonders of the time. The nation grew wealthy through Solomon’s wise trade partnerships, so that even gold became commonplace. But over time Solomon forgot Moses instructions regarding how to be a good leader.

Through Moses God had instructed that all kings were to be literate and write their own copy of the law, the national constitution. In that law, God expressly forbid a king to marry multiple wives, and acquire a wealth in horses, silver, and gold. The king if he was a good leader, was to be the servant of the people, He would not develop a false sense of self-importance and superiority. Unfortunately, Solomon failed on several counts, marrying many foreign wives, developing large stables of military horses, and forsaking God’s laws, the national constitution. As a result of Solomon’s failings, God promised to take all but two of the twelve tribes away from Solomon’s dynasty.

The Lessons of Rehoboam and Jeroboam

After Solomon’s death, Rehoboam, the son of Solomon was initially inaugurated as king of Judah and Israel in a ceremony in Shechem. This was a key community in the northern ten tribes. But the people were concerned. Solomon had been a harsh master, taxing them heavily and forcing many of them to work on his building projects. They asked Rehoboam to ‘lighten their load’ and they would be his loyal subjects. The older men who had the pulse of the nation and knew the people and their circumstances offered their advice. They counselled the new king to be a servant to his people and give them a favourable answer.

Unfortunately, Rehoboam did not listen to his elders. Rather, he chose to listen to his younger peers, These were the progressives of the day, who wanted to maintain their positions and lifestyles at the expense of those they governed. So Rehoboam spoke harshly to the people saying he would lay upon them even greater burdens than his father had done! The result was a divided nation with 10 of the tribes seceding under the leadership of Jeroboam, a once trusted and effective official in Solomon’s service. The remaining two tribes of Judah and Benjamin continued under Rehoboam’s rule. But, without a good leader the nation of Judah fell prey to the Egyptians and their allies from north Africa, who plundered the temple and subjugated the nation.

Jesus’ Teaching on a Good Leader

Jesus warned his disciples of the folly of ruling like the Gentile leaders, who were motivated by greed and a lust for power. They ruled according to their whims through force and intimidation. Of course, many of the kings of Israel had ruled in this way as well. But, Jesus was making a point about the way in which the Romans and Greeks had ruled the nation of Judah for centuries. This was something the average Judean could understand.

A good leader from Jesus’ point of view was one who was a servant to his people, ruling them with their welfare in mind. Good leaders were men like Hezekiah and Josiah, whose personal integrity and service to the nation were above reproach. They were able to preserve their nation from overwhelming outside threats and internal pressures because they relied on God. Without good leadership nations fall to outside forces or succumb to division and in-fighting. In our time, we are constantly searching for a good leader, one who wholeheartedly cares for the people, and is loyal to God and his ways. Will we find the leaders we need in our generation? Will there be a Josiah or Hezekiah, who will help turn the hearts of the people back to the God, for he alone can give them safety?

View a video about God’s Intervention in National Affairs inhttp://cogwebcast.com/sermons/video-archives/appointed-times-god-intervenes-history/