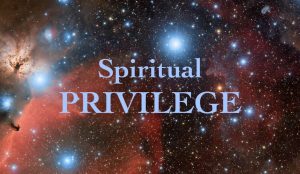 In a world where the epithet of ‘white privilege’ is voiced in a spirit of ignorance or resentment, it might be wise to consider the issue of spiritual privilege. Understanding our spiritual privilege as Christians, and children of God, is a key to our spiritual future. This privilege comes as the result of a covenant made millennia ago with the father of the faith, Abraham. God’s covenant meant that God acknowledged Abraham as his own kin. What a privilege to be part of God’s family. And with this covenant came promises of great blessings. But the covenant also included obligations. God expected Abraham to ‘Keep the way of the Lord.’ He was obliged to communicate God’s family values of what was right and wrong to his children. In fact, God had chosen Abraham because he knew his character, that he would teach his children God’s standards of right living. So are you among the privileged?

This privilege of knowing God, of walking in covenant with him, and of keeping his ways was passed down from generation to generation until the time of Moses. Moses reminded the nation, the descendants of Abraham, that they too had a privilege and an obligation. God had chosen them, delivered them from Egypt, and given them his instructions. He spoke to them directly from the mountaintop out of the midst of the fire. God had a special relationship with the nation, and he expected them to follow his ways and do what was right and just.

Unfortunately, some centuries later, the prophet Amos had bad news for God’s covenant people. They were not God’s ‘pet’ people. So when they failed to meet their obligations and did what was evil, there were consequences. Punishment would follow disobedience to the covenant, as surely as, blessings would result from obedience. The nation could not walk with God unless they could agree to take their responsibility as a chosen people seriously. And if they were not walking with God and serving his purpose as a light to the nations, then God would not protect them.

Luke’s gospel reminds us that as servants of the Lord, we also have a position of privilege, but we must act faithfully. Our privilege as members of God’s household comes with responsibilities and obligations. The wicked servant is self-serving and arrogant, setting his own rules, and misusing his privileged position. So he is no better than an unbeliever, or like the Israelites, is delinquent in fulfilling his obligations. The Israelites had not appreciated the fact that God had liberated them from slavery, and they were unfaithful, refusing to serve as God’s emissaries. Paul in writing to the Gentile brethren in Corinth, reminded them that Abraham and the Israelites were their ancestors in the faith. As sons of God, they were heirs of the promises to Abraham and part of God’s chosen, privileged, people. But they also needed to heed the lessons learned from Abraham and his descendants.

The Privilege of being Children of the King

Like their father Abraham they needed to remember that faith required obedience, privileges came with obligations. It was God’s plan that ‘all Israel’ would be saved, but ultimately those in covenant with God must choose to walk with him. God was and is the one who initiates the covenant relationship, and it is our privilege to accept or reject God’s terms. Accepting God’s covenant is a serious undertaking. It is based in an appreciation of the sacrifice of Christ that enables us to have a relationship with God the Father. And once having committed ourselves to that covenant relationship it requires a further commitment to doing what is just. Like the kinship covenants of antiquity, our covenant with the father makes us children of the King. It is a forever obligation, But with it comes the great privilege of knowing that the God of Abraham will never leave us or forsake us. He will keep his promises and fulfill his obligations to his children. The question will be whether we will be faithful sons and daughters who appreciate our privilege and fulfill our obligations.

Learn more about the Covenants:
http://cogwebcast.com/beliefs/everlasting-covenant-series/