You are here: COG Webcast > Sermons and Media > Videos > Trials and Faith to Endure

Trials and Faith to Endure 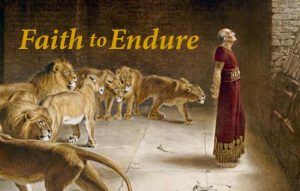 Do Trials Boost or Bust Faith?

During times of crisis, whether personal or national, do we have the faith to endure? In a time of national or global crisis the economic system is fractured, places of worship are closed, and lives are disrupted. But what is our personal response? Are we able to do as scripture admonishes? Can we “hold fast without wavering … persist, endure, and stir up others to good works?” Do we have unwavering faith and confidence, the faith to endure whatever the trial that we must face. Curiously, a recent poll showed that a quarter of the people experiencing hardships now, felt their faith had been strengthened. Perhaps, they had learned the lesson that the James taught about what should happen when our faith is tested.

Faith and Our Spiritual Journey

Faith was to produce in us the qualities of steadfastness, and maturity. It was part of the process of perfecting us, so we would become spiritually mature. Faith was the quality that would guide us on our spiritual journey. And it would bring us through all the essential steps to complete that journey. That faith was grounded in hope of a future that gives purpose to our lives. We know that physical life is temporary, and we all have a “Best before date.” So we need faith in the promise of a non-perishable inheritance guaranteed by God. For it is this promise, that gives us the faith to endure with confidence every trial, grief, or distress.

When Faith is Tested

This faith is based in evidence, because we must put it into action. It convicts us of what is right and true, because we live it. It both, motivates us to take action, and provides the strength and endurance to follow through. The story of Daniel gives us a powerful example of faith in action. Daniel had been appointed by king Darius over many affairs of state. But, as a result there were those who were jealous of Daniel, and who plotted to overthrow him. To their chagrin Daniel had been a wise, moral, faithful, man of integrity. So, the plotters could not find any case of negligence or corruption to smear Daniel’s reputation. However, being resourceful, they found a way to undermine Daniel, by having Darius decree a law abolishing prayer to anyone but the king.

Here was a trial of faith. But Daniel, even when facing the prospect of death in a lion’s den, had the faith to endure. He continued to pray to God, and had confidence that God would deliver him from the political intrigues of the jealous officials and the lions. Daniel’s faith was his salvation. And it was also a testimony to the king, who witnessed the reality of God’s divine power. Daniel had built his relationship with God on a lifetime of experiences and trials. And these trials along his spiritual journey had given him the faith to endure this supreme test. Daniel understood what Paul later wrote, that no test is beyond human experience, but God is faithful to deliver those who have faith to endure.

In Abraham’s Footsteps – Father of the Faithful

As Christians, we are those who are walking in the footsteps of our spiritual father, Abraham. We are to follow his example of faith. His ability to receive the promises that God had made depended on having an heir. So it took faith for childless Abram, to believe God’s promise of an inheritance. It was faith in spite of the physical evidence to the contrary. But when Abraham, against all odds, was blessed with his son, Isaac, there was yet another test of faith. Did he have the faith, based on his years of walking with God, to offer his son to God. God tested Abraham. And he learned that Abraham had unwavering confidence that God would fulfill his promise, even resurrecting Isaac if necessary. Abraham had learned that God “always provides a way.” Abraham’s faith to endure brought a great reward, physically and spiritually.

Scriptures provide a ‘cloud of witnesses’ of men and women who had the faith to endure through all kinds of challenges. They believed God was faithful, his word was good, and he could be trusted to fulfill his promises. Are we following in the footsteps of those who have run God’s path with faithful endurance?