You are here: COG Webcast > Sermons and Media > Videos > The Problem with the Law – Human or Divine

The Problem with the Law – Human or Divine 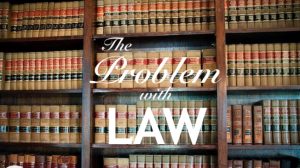 What is the Problem with the Law?

Do we have a problem with the law? Do we have a justice system, or just a legal system? Does the “Rule of Law” matter in a time when it is applied sporadically, or ineffectively? The prophet Isaiah had something to say to a society that no longer valued justice, where lawsuits were the norm, and people trusted in lies. He paints an eloquent picture. For truth had fallen in the city square, the place of judgment. Those with integrity could not enter, and those who spoke out against evil were attacked. Perhaps, our society sadly bears a marked resemblance to that of our ancestors millennia ago.

When Law Does Not Serve Us Well

We in the western societies still boast of our love of the “Rule of Law.” Nonetheless, we are burdened by a vast and costly legal system. And justice is not always the outcome. Laws are created that are ineffective, and do not truly solve the issues they were designed to mitigate. Do laws about masks really solve the problem of viral transmission? Not according to many scientific studies. Laws can be arbitrary or illogical, like limiting house parties to groups of 5 people, while allowing meetings of up to 50 participants. Where is the common sense or consistency in that?

Laws can be silly, like not allowing the collection of rainwater from your roof into a rain barrel. Or, can be revised to allow rain barrels to appease homeowners, but limit the size of the barrel, for some unknown reason. Laws can be discriminatory and unfair favouring one group over others. Affirmative action laws that use factors other than merit based decisions fall into this category. You probably know a few silly, unfair, arbitrary, ineffective or illogical laws in your area of the world.

When the Law is a Weapon

Justice” in the application of reasonable laws can often prove expensive or often ineffective, as people move from one level or jurisdiction to another in an attempt to plead their just cause.
Isaiah was aware of the problem with the law in his time too. Justice was often partial, or hard to access. And often those with power used the law as a weapon to destroy their adversaries. The scriptures relate the story of Naboth who was murdered and his property stolen on the basis of a “legal proceeding” orchestrated by Jezebel, the queen. It was not difficult for her to use her influence to coerce the local leadership to bring false testimony against Naboth and have the judges pronounce the death penalty. And what was his “offence?” He had not been willing to sell a piece of his family inheritance to the King.

The Perversion of the Law

Daniel also dealt with evil, jealous co-regents who created new laws to overthrow Daniel, hoping to bring about his murder. Fortunately, Daniel had the blessing of God’s deliverance, So in the end the schemers were thrown into their own “pit” … quite literally. But God is not pleased when he sees the laws used to pervert justice. Jesus took the Pharisees to task for perverting justice, and bringing the law into disrepute. There was a problem with the law as they interpreted and applied it. They had twisted God’s laws making them of no effect. And, they had added a great burden of their own laws that were hypocritical and self-serving. The Pharisees did not have the mind of God on matters, and their ways were not God’s ways. Their laws were not God’s laws.

The Nature of God’s Law

In scripture we see a great chasm between man’s ineffective or abusive laws, and God’s law. For God’s law was grounded in the truth, unchanging, and impartial. It allowed for mercy and a change of heart. David wrote with enthusiasm of the wonders of God’s laws and their ability to order a just society and shape individuals. God’s laws were transformative, changing peoples’ lives for the better. They were like a lamp providing a clear path forward, helping people avoid danger. Great joy flowed from applying the law and reaping the positive results. God’s judgments based on his law were true, and impartial, protecting the innocent. There was no ‘problem with the law’ when it came to the wise application of God’s laws.

Man’s laws and legal system are fraught with problems, and often pander to humanity’s baser instincts. But God’s law is ennobling. His words are the truth and in harmony with the reality of the universe. God’s laws are a reflection of his character, and grounded in love for others. Consider God’s ways, his “House Rules for Humanity” and remember all the benefits that flow from living in harmony with them.