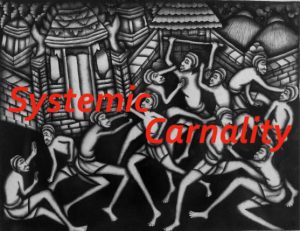 When the ‘Anti-racists’ Attempt to Rule

Is our western society in the grip of ‘systemic racism,’ or is what we are seeing on the world stage a display of ‘systemic carnality?’ In the name of ‘anti-racist’ ideology, and as a ploy to combat “systemic racism,” many historic monuments have been destroyed or defaced.  Statues of industrialists, politicians, explorers, and even abolitionist leaders have faced the same fate … This is a true testimony to the “anti-racists” lack of historical acumen. The protesters are indeed zealous, but they lack wisdom. They have become the judges of things that they really don’t understand.  And in doing so, they are condemning themselves. There is great irony in seeing people adopt the very things they are decrying. The anti-racists have become more ‘racist’ than those they accuse. But this is not systemic racism, rather it is the age-old issue of systemic carnality. And God has the answer.

Paul in writing to the Romans, put it this way:

2 Therefore you are inexcusable, O man, whoever you are who judge, for in whatever you judge another you condemn yourself; for you who judge practice the same things. 2 But we know that the judgment of God is according to truth against those who practice such things. 3 And do you think this, O man, you who judge those practicing such things, and doing the same, that you will escape the judgment of God?

When it comes to the issue of justice, your ethnicity does not matter to God. Ultimately, every individual will have to stand before their Maker and give an account of their actions.  And, all will be judged by the same standard. God is a firm believer in judging people according to their works – what they actually do. People will reap what they sow.  Those who are disobedient and self-seeking will harvest affliction and distress. While those who persist in doing good, even in trying circumstances, will be rewarded with honour and peace. So the truth is, that there is no favouritism with God. Yet we live in a world that seems to ignore the truth on many levels.

This state of ignorance is not the result of racism, but of ‘systemic carnality’- a willful rejection of reality in favour of selfish ‘me-firstism.’ And every race and ethnic group has been guilty, from God’s perspective. All have sinned, rejected the truth, and are worthy of God’s just condemnation. Many people are like the Arabs on the temple mount who now vociferously deny history to promote their ethnic and personal agendas. In their self-imposed ignorance they reject the facts that Solomon, the Hasmoneans, Herod the Great, the Romans, and the Byzantines had all built on the temple mount. History and the “facts” that dispute their race-based claims cannot penetrate the wall of ignorance that the Temple mount custodians hide behind. And they are definitely not interested in understanding God’s perspective.

Denying Abolitionists their Due

Similarly, there are those now, who in an attempt to rewrite history, are guilty of ignoring the facts about slavery and the end of the slave trade in the 1800’s. Though pretending to be ‘anti-racist,’ they deny many men of conscience who were abolitionists, the honour they deserve. Why? Because these men do not fit the race-based narrative of the ‘anti-racist’ factions. William Wilberforce was such a man. Raised as a privileged gentleman in Edwardian England, he rejected the values of his elitist upbringing, and fought his whole life to put an end to the slave trade. Black lives, and all lives mattered to him.

Motivated by a biblical understanding of, ‘love your neighbour as yourself’ he worked ceaselessly to improve the lives of slaves, widows, orphans, child labourers, and the English working class. Wilberforce and many others like him, do not fit into the skewed narratives of the racially motivated ‘anti-racists,’ who through rhetoric and violent action seek to pit one race against another. But God assures us that we can know people by their fruits – what they actually do. In this age of systemic carnality, there are those who believe the ‘ends justify the means.’ They use lies, deceit, and destruction to achieve their goals. But God has a warning. He judges the ‘tree’ by its fruit … and if the fruit is violence, destruction, and racial animosity, then the tree is evil and will be destroyed in the end.

To those who embrace God’s vision for the future, there is no place for ‘systemic carnality’ and selfish ambition that pits one faction against another. God is expecting a different kind of fruit from those who look to him for guidance. William Wilberforce in his battle to end chattel slavery understood this reality from God’s perspective. In urging his peers to reject the slave trade he said, “Sir, when we think of eternity and the future consequences of all human conduct, what is there in this life that shall make any man contradict the dictates of his conscience, the principles of justice, and the law of God!” Wilberforce understood that he had a duty to use his influence, his talents, to take positive godly action. He did not loot, burn, disseminate lies, or violently assault others to achieve his goal.

Overcoming the Effects of Systemic Carnality

As Christians we understand we are God’s slaves – called out of society and into an intimate relationship with our Creator. What we are witnessing in our world is the result of pandering to the base aspects of the sinful nature, systemic carnality: hostility, jealousy, anger, division, quarrels. These traits lead people to bite, devour and destroy each other. But we are called to reject these ways of living and embrace the fruit of the spirit, all the attributes of God’s loving nature. We do this through  God’s spirit that helps us resist the evil nature. The spirit of God gives us the power, the love, the sound judgment, and the personal discipline we need to reject systemic carnality. God expects his people to take positive action, so we can reap the reward of the good seeds we have sown.
Learn more about personal responsibility:
http://cogwebcast.com/sermons/video-archives/personal-responsibility-gods-perspective/