You are here: COG Webcast > Sermons and Media > Videos > Spiritually Sighted or Blind Leading the Blind? 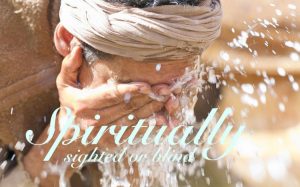 In dealing with the religious leaders of his day, Jesus queried whether they were spiritually sighted or blind. He put them to the test on the Sabbath by healing a blind man who had been blind since birth. It was truly a miracle that many witnesses rejoiced in and readily accepted as the work of God. For not only could the man see, but he could correctly interpret what he was seeing. And he, being healed, now understood the nature of the one who had healed him. For he reasoned, who but a prophet of God could give sight to the blind? But this was not the reaction of everyone. Those who thought they were spiritually superior were not rejoicing! Were they spiritually sighted or blind to the reality of God’s power at work?

Sadly, the religious leaders were truly the blind leading the blind. Though they styled themselves as being spiritually sighted, they could not see or accept the obvious. They were the cancel culture proponents of their day. They were willing to throw out anything or anyone who did not fit their narrow understanding of life. How ironic that the religious leadership’s spiritual blindness prevented them from seeing a true miracle. And for fear of the power of the religious establishment, even the blind man’s parents would not acknowledge the miracle publicly. Are we spiritually sighted or blind? Are we in danger of following guides who claim to have spiritual insight, but are in reality spiritually blind?

A Warning to the Wilfully Blind

When the Pharisees, the religious leaders, asked Jesus, “Are we also blind?” they did not like the answer! Whether they were spiritually sighted or blind, the real issue was whether they were doing what was right. Because these religious authorities claimed to “see,” Jesus said their sins would remain unforgiven. Why? Jesus accused them of being hypocrites, play actors, who were blind leaders. Instead of worshipping God in spirit and truth they were “merchandising” God’s ways. They made the money received from temple sacrifices more important than honouring God who made them. They were blind, missing the whole point, of God’s teachings, and they could not admit this fact.

The apostle Paul, having been a “pharisee of the Pharisees’ knew the nature of these blind guides. He had been one, until God literally opened his eyes. For though the Pharisees claimed to be teachers of light they were in darkness blinding themselves to reality. Instead of obeying the law they claimed to teach, they were reprobate and guilty of theft, adultery, and religious impiety.  Thus they dishonoured the God they claimed to worship, by either rejecting his law or adding weighty burdens to it. Spiritual blindness, anciently and presently, is a matter of attempting to look good without actually doing good. The Pharisees were not unlike the ‘virtue signallers’ of our day, who talk about love, and want people to think well of them. But in reality these people are spiritually blind, trusting in themselves, and rejecting God’s ways as burdensome.

Are We Spiritual Sighted or Blind

If we call ourselves Christians, followers of Christ, we need to ask ourselves, are we spiritually sighted or blind? Jesus encouraged those who were putting on a show of religiousity or spirituality to take off their blinders, so they could see clearly. If they would not, their wilful blindness would end in disaster for them, and those who followed them. But most were spiritually dull and indifferent to Jesus’ message. So Jesus warned them of the fate of those who had gone before. Those who would not change their self-serving ways, have a change of heart, and embrace God’s ways. The record of history was clear, and those who were blind, refusing to see the goodness of God’s ways, would suffer the penalty of their actions.  The natural consequences of living in darkness and refusing the light of God’s teaching would bring destruction. It was a matter of cause and effect.

Abraham’s Vision of the Future

But, for the humble, who were weary of their own ways, and the ways of the world, Jesus offered spiritual insight and restoration. The wilful spiritual blindness of the religious intellectuals, had made it impossible for them to have faith in God and the resultant spiritual insight. It was only to the repentant, faithful, and obedient that Jesus could reveal his will. Only they, like Abraham, would have the eyes to see God’s promises, and walk in his ways. It is Jesus, the Messiah, who gives sight to the blind. He heals those, who like Abraham, are willing to open their eyes to the great promises that God has for his people. So we, like Abraham, must cast off the blinders of our society: false religion, social programming, and selfish ambition. It is only then that we will see clearly the hope of the scriptures — eternal life in the Kingdom of God , as brothers and sisters of Christ and children of the Father.

Learn more about having faith in God’s promises:

Understand your mission as a Christian: