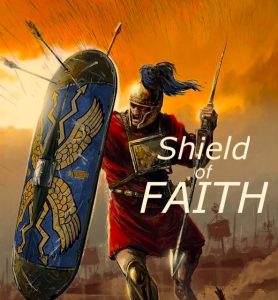 Are you prepared to quench the fiery darts that the Adversary sends your way? When Christ’s disciples asked him about his return and the signs of his coming, he gave a warning. He told them to be careful, so they would not be deceived. They had to walk a straight path in a crooked world. The society would attempt to mislead them, entice them into error, and cause them to deviate from God’s path.

This would become the reality for those who did not know the scriptures or the power of God. And having been deceived, these people would become caught up in the ethnic strife and quarrels of the time. As a result, Christ warned that many people would be offended and betray one another, denouncing even those closest to them. This bleak picture of society would be the direct result of lawlessness and hatred, for the people either never knew, or willfully rejected the ways of God.

Considering the nature of society, God wants his people prepared to do spiritual battle. He tells us that we have an adversary whose goal is to destroy us spiritually. This evil mastermind uses his skill as a master of propaganda to disseminate his clever lies and half truths. And he has many minions to perform his work. In his attack on the truth of God, he hopes to undermine our trust in God and his word. Using his arsenal, the adversary attacks our heart and mind, hoping to make us fearful, discouraged, or complacent. But God encourages us to stand our ground with the shield of faith to quench the fiery darts of fear and doubt.

The Protective Shield of Faith

God gives us the protective shield of faith as protection against the darts, javelins, and flaming arrows that are sent to destroy us. Like the Roman shield of Paul’s day made of iron and leather, God’s shield protects the whole body. And in doing so, it allows us to stand firm and immovable, and ultimately victorious. Paul warns us to be aware of the Prince of the Power of the air and his devices, for he is a tyrannical master who uses the power of words to intimidate and undermine us.

On the other hand, God gives us his shield of faith, the moral authority of scripture. Winston Churchill understood the power of the spoken word, when he sent the “English Language” into battle and encouraged the people of Britain to stand with firm resolve and resist their enemies. Similarly, as followers of Christ, we must take the power of God’s word of truth into battle as a shield against the lies, half truths and fake news of the wicked.

Know your Adversary and his Minions

Peter portrays our Adversary, Satan the Father of lies, as a roaring lion. He warns us not to be his prey, by fleeing, freezing, or following the herd into an ambush. Peter cautions us to be alert, balanced, and self-disciplined. So we carefully choose our battles. Our world is taken in by many of the big lies. Those that deny the sanctity of life, or the wisdom of scripture in defining godly sexual behaviour.

But even the church has been undermined by The Adversary’s ideological/political movements that promote violence, discord, and lawlessness. Jesus said unequivocally, that we could judge these deceptions by their fruits, and reject them. But this is only possible if we have the discernment that comes from hearing and knowing the Word of God. Our trust in the word of truth becomes a shield of faith to quench the fiery darts of lies and deception that are hurled our way.

Preparing our Shield for Battle

Faith in God’s word is our shield, but there is work to be done to acquire this armour.
We must learn to study and then ‘rightly divide’ God’s word of truth. This requires God’s spirit of wisdom to discern how to correctly apply the scriptures to our situation. Knowing the scriptures will help us to respond to those who interrogate us. And it will transform our behaviour so we will not be intimidated, but can give an answer that demonstrates God’s love and wisdom.

Being deeply rooted in God’s word will protect our heart and mind from the Adversary’s messaging. And we will be prepared to deal with the attacks, the slander, the name-calling, and the labelling of our enemy. We must hold tightly to the shield of faith, using the faithful and pure words of God to accomplish our purpose and be victorious in battle. If God’s words fill our hearts, then we can do all things through Christ who strengthens us, and we can quench the fiery darts that come our way.

Learn more about the faith we need:
http://cogwebcast.com/sermons/video-archives/fruit-of-the-spirit-faith-divine-persuasion/