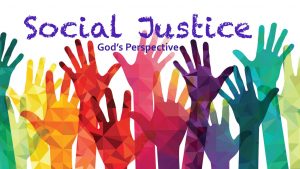 When society is in turmoil over the question of ‘justice,’ does anyone care to consider the issue of social justice from God’s perspective? The Psalmist, David, wrote eloquently of God’s nature and his love of justice. As a responsible leader, God’s throne, the symbol of his sovereign power was established on a foundation of justice and righteousness. God was, and is, invested in the rule of law, and its fair and equitable administration. He promises a future where the cause of the just and the oppressed will be upheld. While the wicked and lawless will be trapped by their own evil and destroyed. But is this the social justice that many are demonstrating about in our time?

Social Justice Dysphoria and its Consequences

It would seem that the modern western world is suffering from ‘social justice dysphoria’ for they do not see the reality of social justice from God’s perspective. Common concerns and solutions proposed by the typical social justice warrior (SJW) have very little correlation with God’s concept of justice. SJW’s focus on white privilege, racism, male patriarchy, access to abortion or euthanasia, transgenderism, LGBTQ issues, #metoo, anti-capitalism, entitlement, and welfare policies. In the name of ‘social justice’ they condone rioting and wanton destruction of property. And the result is as the prophets of God predicted. For having forsaken God’s standards of social justice the land mourns for the ‘whole head is sick. and the heart faints…and the cities are burned and strangers waste the land.’

The Christian and Social Justice

But God is very interested in social justice, and he expects the faithful remnant that must live in a corrupt society to be concerned about social justice from God’s perspective. It begins as Paul says with believers, not having partnerships with those in the world who embrace lawlessness and darkness. A Christian is to be separate from the world and not involved in violent, abusive, greedy, or corrupt behaviour. And within their own Christian communities, they are not to support or encourage the hypocrites. Those “pretend” believers reject God’s standards when it comes to social justice and personal behaviour.

So where do we go to find the nitty gritty on social justice from God’s perspective? God provided detailed instructions in scripture, which have both a national and an individual application. The key element of God’s teaching on social justice was that the law and those making judgments based on the law would apply them equally to the native-born and the foreigner. Everyone was expected to live up to the same standard. And everyone was to have the same access to justice. It was never a case of getting the ‘best justice money could buy.’ Nor was it a question, of favouring the poor and lowering standards for those who seemed ‘disadvantaged.’

When it came to getting a fair hearing your ancestry, wealth, or social status did not matter to God. Judges were to judge based on the merits of the case in accordance with God’s standard, not on whether someone was rich or poor, black or latino. God stated emphatically that he had made all people of one blood. And he, being the God and creator of all people, demands that all people follow the same law. And, he requires the judges to administer justice without partiality.

In the early church there was an example of the Greek-speaking widows not being cared for as they ought to have been. Perhaps it was just an oversight, or perhaps the natural prejudices against Gentiles was at play. However, God is equally concerned for all widows and their special situation. So this inequity was quickly corrected. Exercising wisdom and leadership, church leaders administered social justice from God’s perspective. But they did it with an understanding of the sensibilities of their time. They asked the Greek-speaking brethren to choose their own leaders from among themselves. These men could take on the responsibility of ensuring that their widows were properly fed and food was distributed fairly. We could use this kind of social justice in our world, on a local scale, to resolve some of our intractable problems.

What’s a Christian to Do?

The royal law, of loving one’s neighbour as oneself, is the principle that undergirds all of God’s laws, statutes, and judgments. We are our brothers’ keepers and are to bear each others burdens in a spirit of love and joy. We are called to do good to all. As representatives of the God of justice, we are to shed the light of his way of love and peace… So we would never think of rioting, destroying our neighbours property, pillaging their goods, and slandering their name. For a Christian the ‘end never justifies the means.’

Christians cannot pretend to be decrying ‘racism’ while burning down neighbourhoods. We cannot hypocritically condemn a whole race for the actions of one individual. We cannot pretend to be helping the poor by giving them free access to abortions. Christians cannot stand by or support immoral behaviour,  as God defines it, in the name of “social justice.” God hates the hypocrites who proclaim a message of ‘social justice,’ while promoting deception, death, and destruction. He hates the judges who are prejudiced and preferential in their administration of judgment. And he will not be patient forever.

Ultimately, God will call everyone to account, for he is the quintessential just judge. He will judge everyone fairly by the same standard. God will administer justice with mercy for those who are merciful. But, to the lawless, those who hate God and his social justice, they will reap what they have sown.