You are here: COG Webcast > Sermons and Media > Videos > Salvation Equation: Did Luther Get It Right?

Salvation Equation: Did Luther Get It Right? 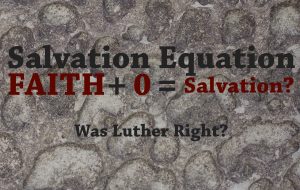 Luther Begins a Reformation and Develops His Salvation Equation

In 1517 Martin Luther posted his 95 theses in Wittenberg, decrying some of the abuses within the Catholic church. But it took a few years for him to get to the point of calling the Pope, the “Anti-Christ,” and throwing away the need for the Catholic sacraments. During this time Luther was developing his idea about “justification through faith alone.” He said he based his new understanding on scripture alone, “sola scriptura.” But did he? Luther had concluded that because we were freely justified (made right with God) through grace, that all we needed was faith. This fit neatly with his background as an Augustinian friar, as it built on Augustine’s idea of predestination. So Luther’s salvation equation was Faith + 0 = Salvation. No “works” were needed. But was Luther right?

Five hundred years later, we see within the Protestant churches the effects of Luther’s salvation equation. Recent polls by Barna pollsters have concluded that there is little difference between believer and non-believer. Barna reflects on the responses of believers and concludes that their “supposed faith makes little difference in their lives.” Only 15% of the Christians polled were notably different from their secular counterparts in any “good” way. The problem with the faith = salvation equation is that it is missing an essential biblical component. And this lack has produced an ineffective faith, one that does not transform the lives of the believers.

James and his Epistle of Straw

Luther was well aware of James admonition, “Faith without works is dead.” But instead of embracing this truth, Luther rejected it in favour of his own ideas. He called James writings, an epistle of straw*. Yet, James was not alone in his insistence that faith must be accompanied by works. Paul in admonishing the Romans, eloquently writes of the need to obey the law of God. The law has its part to play in making us right with God. He confirms that those who have “died” to sin cannot continue sinning (disregarding God’s law.

John also wrote of the need to put sin (lawlessness) out of our lives so we can live a new live of obedience. Obedience to God, “works” were to be a proof of our changed lives, and an expression of our faith. So a new equation must begin with the premise that Salvation = Faith in God’s grace + Righteous living (works of obedience) For as James said, “But someone will say, “You have faith, and I have works.” Show me your faith without your works, and I will show you my faith by my works.”
Law and Lawlessness Series

*An Epistle of Straw: What Martin Luther Said about James “Though this Epistle of St. James was rejected by the ancients, I praise it and hold it a good book, because it sets up no doctrine of men and lays great stress upon God’s law. But to state my own opinion about it . . . I consider that it is not the writing of any apostle. My reasons are as follows. First: Flatly against St. Paul and all the rest of Scripture, it ascribes righteousness to works. . . . Second, its purpose is to teach Christians, and in all this long teaching it does not once mention the Passion, the Resurrection, or the Spirit of Christ. . . . James does nothing more than drive to the law and its works; and he mixes the two up in such disorderly fashion that it seems to me he must have been some good, pious man, who took some sayings of the apostles’ disciples and threw them thus on paper; or perhaps they were written down by someone else from his preaching. . . .

In a word, he wants to guard against those who relied on faith without works, and is unequal to the task . . . and would accomplish by insisting on the Law what the apostles accomplish by inciting men to love. Therefore, I cannot put him among the chief books, though I would not thereby prevent anyone from putting him where he pleases and estimating him as he pleases; for there are many good sayings in him.”1 “In a word, St. John’s Gospel and his first epistle, St. Paul’s epistles, especially Romans, Galatians, and Ephesians, and St. Peter’s first epistle are the books that show you Christ and teach you all that it is necessary and salvatory for you to know, even if you were never to see or hear any other book or doctrine. St. James’ epistle is really an epistle of straw, compared to the others, for it has nothing of the nature of the gospel about it.”