You are here: COG Webcast > Sermons and Media > Videos > Mothers of Faith — Agents for God

Mothers of Faith — Agents for God 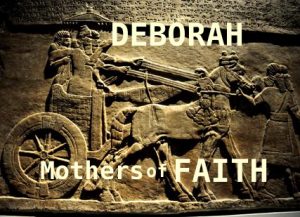 Leaders in Times of Trouble

There was a time of great calamity in the history of the people of Israel. They had suffered for twenty years under the cruel hand of Jabin of Hazor their enemy. They needed wise and dedicated leadership to lead them out of their troubles. And the best man for this job was a woman. God had chosen Deborah to lead his people as their judge, one who was governor, as well as, legal decision-maker and arbiter. In this dangerous time when settlements had ceased and foreign forces were invading, God chose a mother in Israel to encourage Barak, her military leader. God spoke to Deborah urging her to gather the people to cast off their oppressors. And in the end, God blessed the efforts of Deborah’s small ill-equipped army of volunteers in their fight against a much superior force of chariots and well-armed soldiers. Mothers of faith can make all the difference.

When I think of Mother’s of faith, my own mother comes to mind. She wanted me, and she risked her life to carry me to full-term after her doctor’s had counselled her to abort me. She was an example of bearing up under adversity, of generosity and love. As the family disciplinarian, she taught me honesty, self-discipline, and moral integrity. She had an appreciation of the transformative power of God in my life when she saw the changes that came about as I started to walk with God. Her faithfulness made a difference in my life.

The ideal woman of valour of Proverbs 31 is also a woman of faith. She is skilled, hardworking, diligent, knowledgeable. She capably cares for her family’s physical needs and inspires them with her wisdom and kindness. She is an example both at home and in the community of a mother of faith whose love for God’s ways is her hallmark. Perhaps that is why God uses a godly woman, a mother of faith, as the personification of Wisdom. She is someone who exercises good judgment and speaks the truth out of a pure heart and wholesome motives.

The scriptures recounts the stories of many mothers of faith. Their faithful commitment to God and his promises enabled them to be partners in God’s great story of salvation for all people. And it also brought blessings to their families and to their nation.

Good Works in the Family