You are here: COG Webcast > Sermons and Media > Videos > Miracles are Not Enough – Remembering the Story of Israel

Miracles are Not Enough – Remembering the Story of Israel

The Invincibility of Spiritual Experience 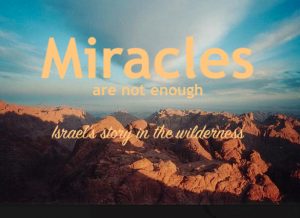 When Miracles are not Enough

Are you looking for a miracle to bolster your faith? The sad reality is that miracles are not enough. Paul made this reality very clear in writing to the brethren at Corinth. They had made an amazing transformation by accepting the biblical message and rejecting their pagan roots. As a result, they were now ‘spiritual Jews’ and the children of Abraham through baptism, even though gentiles by birth. But Paul had a warning for them and for us. He reminded them of the history of their ancestors, the Israelites in the wilderness. And Paul explained the pitfalls that tripped them up, even though they had seen God’s amazing deliverance. It was evident that the miracles were not enough. For intimate personal experience with God’s miracle working power did not transform the people or build their faith. So what is the lesson for us?

A Miracle of Deliverance Forgotten

Even the Jews, who claimed to know God and keep the law, were not following the faithful example of their forefather, Abraham. The Jews told Jesus that their people had ‘never been slaves!’ This was a clear testimony to their lack of appreciation of God’s deliverance from Egyptian slavery. They seemed to have forgotten the great miracles the Lord God performed when he delivered the nation from bondage. Paul rehearsed the events of  national deliverance in writing to the Corinthians. The Israelites had escaped miraculously through the sea, and the Lord had led them in a pillar of cloud and fire. In fact the Lord, the angel who led Israel, their Rock in the wilderness, was none other than Christ himself. The people saw his miraculous works; they drank the water from the rock and were fed with manna. In their case it was evident that ‘miracles are not enough,’ For it did not change their hearts.

Paul wrote his warning to the Corinthians, because he already knew intimately the danger of denying Christ’s miraculous role as the source of living water. The apostle Paul was a part of the generation of Jews who had seen Jesus’ miracles. And yet, they had eventually sought to kill him. The religious leaders of the time thought they were worshipping God. Yet, in reality they’d been no wiser than their forefathers who had lost sight of the Lord God, and forgotten his miracles. They did not appreciate God’s leadership or Moses, the leader God had chosen. And now they were rejecting once again, their Messiah, and source of living water.

Without leadership and lacking faith the Israelites had bullied Aaron into making an idol. It was a golden calf; something that they could see and worship. Paul warned the brethren not to be like those who forgot God’s miraculous goodness and faithfulness by slipping into sins of ingratitude, immorality, and rebellion. They were not to follow in the footsteps of their ancestors. For having been led symbolically out of Egypt, out of sin and darkness, they were to walk in a new life. The brethren were now children of light called to live faithfully, and responsibly. In embracing what was wholesome they would walk with God and fulfill his purpose. But there were other dangers.

Faith during Trials and Troubles

Miracles were not enough for those who were complainers, rebels, and conspirators. These people were guilty of testing God by questioning his purpose and refusing to acknowledge his power. Korah, Dathan, and Abiram were salient examples of rebels who despised God’s authority through Moses, and made false accusations. They were not content until they had spread their malicious rumours and created a ground swell of discontent among the people. Paul warned the brethren not to be deceived by such whiners and complainers, nor adopt their contagious contentious approach to God. Rather, Paul encouraged people to trust in God’s miracle-working power. He wanted the brethren to know, that just as God delivered the faithful in Israel, so he would spare those who trusted in him. And their obedience would be the proof of their trust. Their faith would find fulfillment in action. There was no difficulty or trial too great, that faith in God could not overcome. God would provide a way of escape.

Miracles are not enough to bolster our faith. But those who walk faithfully, who respect God’s work in their life, and embrace his purpose will enter the spiritual ‘Promised Land,’eventually! For God knows how to rescue the godly from every situation…miraculously if need be…and fulfill all his promises.