You are here: COG Webcast > Sermons and Media > Videos > Live as Pilgrims and Exiles – Do Not Fret!

Live as Pilgrims and Exiles – Do Not Fret! 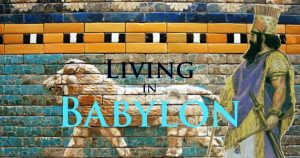 Living in a Polarized Society

How can we live as pilgrims and exiles in a society that rejects godly values or the existence of the Creator? Navigating the troubled ideological and cultural waters of modernity can be stressful! But our future depends on our thoughts, attitudes, and actions. So what is God’s advice to his people through David’s psalm? “Do not fret!” So, if we are grieved, angry, and incensed at the behaviour of others, and the denial of godly morality God gives this warning. He does not want us to “go on the warpath.” Rather we are to put our trust in his justice and his timing. So what thoughts, attitudes and actions should we adopt in order to secure the future God has planned for us?

Paul was in agreement with David on how to approach living with people who reject God. Paul had been teaching about God in Ephesus. And as a result, he was thrown into a dank, vermin-infested prison by corrupt local officials. His response was not a scathing tirade against the injustice of the system, or person attacks against the corrupt authorities. Rather, like David, he had peace of mind because he looked to God to declare him innocent, and free him.
Peter mirrored Paul’s sentiments in encouraging his readers to patient endurance when facing persecution and abuse.

Paul’s Advice for Living in a Troubled World

When we consider the Roman empire during Paul’s life, his advice takes on even greater import. God had brought Paul to Rome in a time when Nero ruled. This emperor who murdered his mother, has become a classic symbol of cruelty, tyranny, and extravagance. Yet Paul’s advice was to trust in God to deal with the lawless. He warned believers that they needed to maintain a strong grip on the teachings of scripture so they would not be deceived. And. Paul encouraged them to find comfort in God so he could strengthen them to do and say good things.

Jeremiah and Jesus – Living in Captivity

Both Peter and Paul understood the lesson of Jeremiah and the need to live as pilgrims and exiles in society. We cannot live as “conspirators” or “rebels” for God teaches patient endurance and not sedition. God expects us to look to him for deliverance. And in the meanwhile, we need to consider Jeremiah’s advice. God’s will was that his people in exile should live productive, quiet, and peaceable lives as a light to those around them in Babylon.
Jesus put it succinctly when he admonished his disciples to give to Caesar what is his, and to God what is God’s. God wants our loyalty, so living as pilgrims and exiles our thoughts, attitudes, and actions need to conform to his will. And we need to stop fretting about the evil-doers around us who seem to prosper, for God will bring justice in his time.