You are here: COG Webcast > Sermons and Media > Videos > What Would Jesus Do? Following His Footsteps

What Would Jesus Do? Following His Footsteps 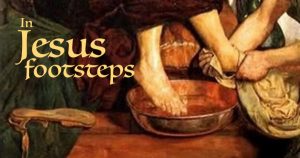 What Would Jesus Do? Following His Footsteps

What did the Disciples Do?

If you do not know the biblical worldview, you might be surprised that Jesus’ disciples were preparing for Pesach (Passover) and the 7 days of unleavened bread just before Jesus’ death. And though many today, celebrate Easter at this time of year, this was not the custom of Christ’s followers. How do we know? The bible provides the evidence, and we see the customs of the early believers from the accounts of Peter, Paul, and John.

Jesus came to be the first of many brethren. His sufferings perfected him and prepared him to be our high priest — one who could empathize with their humanity. Jesus ministry was one of reconciling people to the Father. The blood and wine of the Lord’s Passover was symbolic of his death — the ultimate sacrifice. It is this atonement that he made on behalf of all who trust in him, that has brought believers into a family relationship with the Father. So now that we are the brothers and sisters of Christ, following our elder brother are we asking ourselves, “What would Jesus do?”

The evening that Jesus was betrayed, he took the time to teach his disciples important lessons. He affirmed that partaking of the bread and wine was a renewal of the covenant relationship they had with the Father. Jesus Christ, the head of God’s household, set the example for his brethren, his brothers and sisters. He began by washing the feet of those who’d served with him. He then instructed them to do likewise. This important lesson in humility is something that believers continue to do on a yearly basis. John made it clear that those God chooses and sends to teach others are responsible to follow the pattern that Jesus established. So, what would Jesus do, and what will you be doing this coming year? Are you following the master teacher and building on the rock?