You are here: COG Webcast > Sermons and Media > Videos > House Rules for Humanity – Who Sets the Rules?

House Rules for Humanity – Who Sets the Rules? 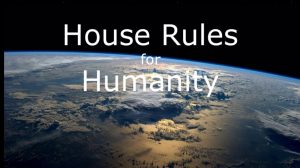 Do you know the “Golden Rule?” Would it come as a surprise to you that many people do not know what it is? The “Golden Rule” is something that is even taught in secular school settings. Why? Because it encourages children to treat others in the way that they would like to be treated. Most children in this generation do not know the source of this precept that is one of the house rules for humanity. But those with a Christian background would recognize the “Golden Rule” in Christ’s admonition: “Therefore, whatever you want men to do to you, do also to them, for this is the Law and the Prophets.” Is this precept important in your life?

The Law of Love

Jesus was merely quoting from a much earlier writing, for Moses had written something similar a millennia earlier. Moses wrote as the Lord commanded, “You shall not take vengeance, nor bear any grudge against the children of your people, but you shall love your neighbour as yourself: I am the Lord.” The “Golden Rule” encourages people to love others as they would want to be loved. The apostle Paul continued this theme in his letter to the Romans: “Owe no one anything except to love one another, for he who loves another has fulfilled the law.”

The law that love was to fulfill was envisioned as the house rules for humanity. These were the moral and ethical obligations that all people in the “house” were obliged to respect and follow. And the result would be love – agapao – that which was in the best interest of another person socially and morally. But who was responsible for setting the rules? Who would define what love is, and how it could be manifest in daily living?

Creator and Master of the House

All biblical writers from Isaiah to John agree that it was the Lord God who was creator of all things. And as the Creator, he had both the right and the responsibility to write the rules in his house. The Lord God was both a father, and master of all he created. He created the earth to be inhabited. And the inhabitants were created in the likeness and image of their Creator for a great purpose. Given life, and the power of intellect and emotion, the people the Lord had created could live in a covenant relationship with him. They could follow his house rules and reap the benefits. But he also gave them a choice. They could abide by his house rules and serve him, or not. They would have to choose which master they would serve, and there were only two choices ultimately.

The Father’s House Rules for Humanity

The house rules for humanity were not a burden. They were not onerous. Nor were they punishments, though there were penalties, both natural and logical consequences for ignoring the house rules. These rules, these standards of conduct, reflected the nature of God. When properly applied they would produce peace, beauty, and harmony. The Lord’s motive in providing the house rules for humanity was that people could enjoy long, happy, productive lives in harmony with God, other people, and the environment. In choosing to keep the house rules we show our love for God, our Father, and the other members of the family. But we are given a choice. There is free will, and our choices, for good or ill, will have consequences.

Isaiah likened God to a Father who gave life to children. But these children did not appreciate their Father, and rebelled against his teachings. They left the old paths, deserted God, and stubbornly walked in their own evil ways. And our world is the result. A world in which the “Golden Rule” is not the way of life for most. And hatred, jealousy, and the spirit of murder is attempting to drown out the love for neighbour that could bring unity and peace. Freewill has been used to create a society that at present is crumbling under the burden of its own evil deeds.

But change is possible. People have a choice, and they can reject the culture of materialism and meaninglessness. They can embrace the moral logic of the universe and live in harmony with the house rules for humanity. God calls out, offering life and liberty to those who will love him. He asks that they do what is just, love mercy, and walk humbly with him. The house rules for humanity will be their guidebook leading them on the path that will bring success.