You are here: COG Webcast > Sermons and Media > Videos > God’s Reality or Solipsism – You Must Choose

God’s Reality or Solipsism – You Must Choose 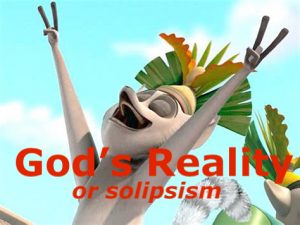 Paul made people aware of the need to make a decisive choice, for we either buy into God’s reality or solipsism. In writing his last epistle to Timothy, Paul warned of the problems of solipsism, and admonished Timothy to avoid solipsistic people. Not that Paul would have understood this modern term, but rather that he understood the nature of people to be self-absorbed. Paul saw within his society the seeds of the future. He understood that the notion that the ‘self’ is the only reality often degenerates into a boastful, arrogant, self-love, that focuses on gratifying self with sensual pleasures. In modern times it was Descartes who proposed that ‘I think and therefore I am.’ This concept has transformed modernly into selfish solipsism championing the idea that ‘the self is all that exists.’ But what should the attitude of a Christian be?

King Julian and the ME Approach

Humanistic inward-focused solipsism, this self-absorbed narcissism, is driving much of the culture wars of our time. This solipsistic thinking often degenerates into mob rule, burning, and looting. People who adopt this way of thinking no longer understand the importance of the social contract. Like the cartoon character “King Julian” their refrain is “It’s all about ME!” In denial of the reality beyond their own wants and desires, they have forgotten the principles that ennoble individuals and hold societies together. But, God provides an answer. He gives us a clear objective view of reality grounded in fact and viewed from his perspective. His perspective is that of the Creator of humanity; he knows us because he made us.

With this understanding in mind, the Creator asks us to look outside ourselves to see the wonders God has made through Jesus Christ. And he challenges us to develop the fear – reverence and deep respect – of him and his ways as the starting point for gaining the wisdom to live fulfilled lives. Knowing that knowledge alone often leads to self-righteous ignorance, God challenges us to put on his nature. His nature is one characterized by the kind of love that is founded in the knowledge of God and builds and encourages others. It is a love that looks outside of self, and embraces empathy, gallantry, and self-denial in the service of others. It is love that emulates the Messiah, Jesus Christ, who selflessly gave himself in order to give us the hope of eternal life.

This ‘agape’ love fulfills all of God’s commandments, because it does no wrong to others. It is the way in which we obey the command to love our neighbour as ourselves. This kind of love goes beyond mere feeling, to take action to unselfishly do what is in the best interest of others. And God does not leave it up to our imagination to decide what is in their best interest! Rather, he has given us a book of teachings and stories to help us know how to care for others. Paul explained this principle with an example that resonated with the people of his day. These people were trying to reject their prior destructive cultural practices learned in a pagan society.

Many believers, felt compromised if they were to eat clean meat in the market, because they knew it would have been offered to idols, something they used to do. Paul advised those who realized the clean meat was not tainted by these pagan rituals, to avoid eating it, if it would cause someone else to stumble in faith. Paul emphasized our freedom from sin, did not mean freedom to ‘do our own thing’ at the expense of someone else. Perhaps a modern day example would be to refrain from drinking alcoholic beverages in the presence of someone who was trying to overcome an alcohol addiction. We may be free to drink in moderation as the scripture admonishes. However, we would not want to take the solipsistic ‘Me First’ approach and drink in the presence of someone who might be undermined by our action. In loving concern we would abstain, so as to avoid causing another person to stumble and fall back into destructive habits.

Jesus Christ is our only Shepherd, the one we should hear and follow. As the apostle John says, all those who propose a different philosophy of life are thieves and robbers. The false teachers are like hirelings who flee when the wolf comes. And being self-absorbed, they do not care for the sheep, the people who follow them. In fact Paul says these people will bite, devour, and consume one another. They have bought into solipsism. They are relying on the self to tell them all they need to know. And, they have rejected the objective reality from their Creator that is found in the scriptures.

However, followers of the true shepherd have a different mind-set, a different philosophical outlook. They reject the ‘Me First’ approach in favour of the scriptural teaching to love their neighbour as themselves. They will set the Golden Rule as their standard in terms of outlook and behaviour. They will treat others with the same kindness, respect, and fairness that they would hope to receive. They will be children of their Father, whose defining characteristic is “agape – chesed,” loving loyalty that cares for the welfare of others. We all have a choice to make, will it be God’s reality or solipsism.