You are here: COG Webcast > Sermons and Media > Videos > Feast of Trumpets – Day of Judgment 2020

Feast of Trumpets – Day of Judgment 2020 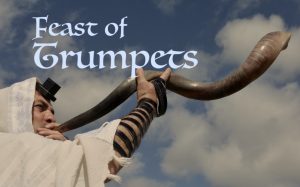 A Day of Judgment – A Time to Remember

The Feast of Trumpets, Yom Teruah, is considered to be a day of judgment by those who have a national covenant relationship with the Lord God. At this time many in the Jewish community who celebrate the day will spend some time reflecting on the past year. Then they will make resolutions for the future.

But most Christians have forgotten the command to observe the Feasts of the Lord. And, as a result they neither know their spiritual history, nor the significance of these annual Holy days. As the apostle James warns believers, if you are just hearers and not doers of the law, then you will forget. And having forgotten, you will no longer understand the value of God’s teachings and the joy that comes with walking in the ways of the Lord. It is dangerous to lose touch with the past.

Losing Touch with the Past

The biblical calendar and the appointed times of the Lord help us remember those times when God has intervened in history. They also help us anticipate the future, and our role in preparing for future events. In the world at large surveys have shown a serious decline in the understanding of historical knowledge. Many people no longer understand events of the past, nor the cause and effect relationships of those events.

The Vital Importance of Knowing the Scriptures

As “scripturalists,” those who believe, as Jesus did, that we should live by every word of God, we need to know the scripture. It is always a danger to trust in human traditions and forget the reality of biblical history as outlined in the Hebrew and Greek scriptures. For the end result of that, according to Jesus’ message to the Pharisees, was that ignoring the scriptural commands in favour of their traditions meant their worship was useless. Though they observed the Holy Days, God’s appointed times, they did not understand their full meaning, for they rejected Jesus as their Messiah. Nor could they fathom what the disciples came to understand, that the Messiah would return again to rule all nations.  This knowledge was preserved by the disciples and rehearsed yearly through the observance of God’s holy times.

A Future Time of Great Deception

Paul wrote of this time, envisioned by the Feast of Trumpets, a time when the Messiah, the Lord Jesus, would return at the last trump. But, before this momentous event was to occur, there would be an age of great deception. At this time the historic realities and the truth of scripture would be obscured. And, a religious political leader would arise who would do false miracles and claim to be a god. But in reality he would promote lawlessness and oppose everything that the God of scripture teaches in his Word. This charismatic leader with his “mystery of lawlessness” would deceive and seduce the spiritually blind – most of humanity. Only those who know their history, their spiritual roots, and the reality of scripture would be able to hold fast to the truth – the true nature of reality. The Feast of Trumpets anticipates such a time and encourages believers to be prepared and faithful to the truth as revealed in the scripture.

The Messiah’s Day of Judgment

God’s message to all people is that judgment is coming, for Christ will judge the world when he returns. But as Isaiah and Ezekiel prophesy, the Lord God will send a warning ” a watchman who will blow the trumpet” before the Messiah returns. And it is up to every individual to hear the warning, examine themselves and turn away from evil and embrace what is good. For the Lord God is fair and he will judge every person according to his standard of justice. Everyone will reap what they have sown. Having heard the message of the prophets the Jews consider the “Days of Awe” the 10 days from Trumpets to the day of Atonement, to be a time of judgment, and rightly so. But for Christians there is more to the message.

Judgment on the Household of Faith

The apostle Peter was very clear in stating that now is the day of judgment for believers…for judgment must begin at the house of God. As followers of Jesus, the Messiah, we will all stand before his judgment seat at his return. He will judge all of his people by the same standard, and everyone will be rewarded according to their works. So what are we to do?

Peter and Paul encouraged the brethren to persist in doing good, caring for the welfare of others, and living obedient lives in harmony with God’s will. For when the Lord God comes he promises to destroy the wicked, those who destroy the earth. But, he will also reward his servants, those who know their Lord, and have faithfully fulfilled all of his commands. This will occur at he Seventh Trumpet, the last Trump, the Day of judgment envisioned by the Feast of Trumpets.