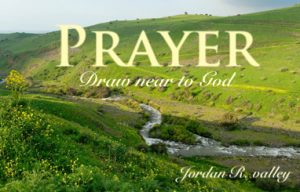 Abraham Talks with the Lord God

Abraham knew the power of effective prayer. Had he not prayed for a son? And God had promised to bless Abraham with his heart’s desire for, “Nothing was too hard for the Lord.” It did not matter that Sarah was well beyond child-bearing age, for God could do the seemingly impossible. Their son, Isaac, was the answer to their prayers; Isaac, meant “laughter,” for Sarah had laughed at the idea of an old woman having a baby. As a consequence of Abraham’s answered prayer, a blessing was passed on to all nations. As they followed Abraham’s footsteps and walked in the way of the Lord, they would be blessed. Abraham’s effective prayer made a difference, and God listened. Is God listening to us?

The Lord is a “Hands-On” God

From the beginning of Creation, the Lord God has been a “personal God” interacting with the people he had created. He walked with Adam in the garden of Eden, and he personally investigated the building of the Tower of Babel. And when the problems in Sodom were reaching epic proportions he went to see the situation for himself. The Lord God was aware of the needs of his people, and spoke directly with Moses. He assured Moses that not only was he aware of the sorrows of the people, but he would deliver them and fulfill his promises. The Lord was not distant and remote. He was and is informed and listening to those who call out, to him.

The Lord God was willing to listen to those who drew near to him, in intimate personal conversation. It is prayer, this daily dialogue with God that lets us draw near to him. But we must be careful that our approach to God is sincere and without hypocrisy. Jesus castigated the religious leaders of his time, for prayer to them was no longer an intimate dialogue. They had turned prayer into ritual and mere lip service, hypocritically invalidating God’s word with their tradition. But God is looking for those who will worship and pray, in spirit and truth. He wants to hear from those who fear him, and are willing to obey him.

Confidence to Pray to the Father

We can have confidence in effective prayer, because Jesus our Lord God sits at the right hand of the Father, and he intercedes for us. Through Jesus Christ our Messiah we can now have access to the Father. When we approach prayer with sincere, repentant hearts we can have our sins washed clean and thus approach the Father. We can enter the Father’s presence and make our requests known with confidence that we will be heard. Jesus Christ our high priest understands our situation and empathizes with us. He is merciful and offers the help we need when we request it through effective prayer.

James encourages believers to draw near to God through effective prayer, that intimate dialogue with God. And he will draw near to us. But we must approach with a pure heart and without hypocrisy. We must seek God’s will and not our own. In this manner Abraham was able to talk to God about the situation in Sodom.

Abraham understood that the urgent request of a righteous person could make a difference. Abraham believed God was flexible and persuadable, and therefore his requests could make a difference. And so Abraham pleaded with God for Sodom. Earlier, with God’s help, Abraham had saved his nephew Lot and many of the people of Sodom from captivity by a hostile foreign power. So Abraham knew the people of Sodom, and he prayed in hope. He asked that the whole city be spared, for the sake of the righteous few that might live there. And the Lord God listened, patiently.

Abraham was not haggling with God, nor bargaining to get his own way. He was truly concerned for those in Sodom that he knew and loved. He was bold and persevered in his dialogue with God, and in the end God acted by delivering Lot and his family. Abraham was no doubt saddened that so few in Sodom were willing to listen to God’s warning. But he was grateful that God had preserved his nephew. For Lot was an honourable man, who lived a righteous life in the midst of a very corrupt society.

God’s nature does not change. He listens to people of integrity, who are just and seek the truth. He answers the effective prayers of the humble who seek him and live with moral courage. And, he may even be persuaded to change his mind in regards to showing mercy or offering deliverance. He is waiting and ready to draw near to us, if we draw near to him in prayer.