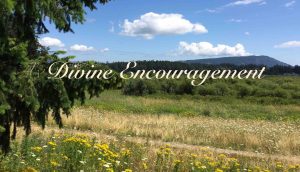 Divine encouragement is not the modern concept of “Go on; you can do it!” Rather, it is a reminder that good outcomes are more than the result of mere human ability, strength, or perseverance. It is a reminder that God is our strength and refuge in times of trouble. Though the earth is in turmoil, and nations are in chaos, the Lord God promises that he will preserve his people and give them a future. Where will we find this divine encouragement?

Moses in leading the people of God out of Egypt faced a dilemma. With the Egyptian army behind them and the Red Sea in front of them, they were in need of divine encouragement. God’s reply to Moses plea was, “Be still and know that I am God” Do we know what that means? God was fully aware of the plight of the Israelites with the Egyptians in pursuit. And he had a plan to intervene. But, the people also had to have courage to face the problem, and strength to act, trusting in God’s deliverance.

Courage to Step Forward in Faith

It was not easy to take those steps onto the Red Sea bed with the unknown ahead and the clamour of the enemy behind. And though they were encouraged to know God was with them and would preserve them, they still had to faithfully walk forward. The path God had laid out for them, was not an easy path. Yet, in walking with God, they would gain the confidence to overcome every obstacle. They would experience his miracle-working power of deliverance and appreciate this divine encouragement.

When Moses fell short of God’s expectations, by angrily striking the rock to provide water for the people, God still provided divine encouragement. It was a great heartbreak for Moses to learn that he could not enter the promised land. After serving God faithfully for forty years, this must have been a severe blow. Yet, Moses had an even greater reward that he anticipated. Moses’ divine encouragement was a promise far better than walking into the territory promised to Abraham, Isaac, and Jacob. He looked forward to the resurrection to eternal life, and the spiritual inheritance of all those who have faithfully served Christ. Moses’ divine encouragement came in the form of a vision of a future, the ultimate spiritual promised land, that was guaranteed by the Creator of all things.

All those called by God to perform his service are given divine encouragement to fulfill their responsibilities. Moses, though he wouldn’t enter the promised land with the people, fulfilled his duty in preparing Joshua to lead them. And Joshua, was given the encouraging promise that God would be with him, just as he had been with Moses. God spoke to Joshua promising him success. encouraging him to be strong and courageous and fulfill all of God’s commands.

In daily walking with God and providing the military leadership the people would need, Joshua would find the encouragement he needed to fulfill his mission. And though Joshua understood his human frailty, he trusted the Lord God to provide his spirit and wisdom to empower him in his role. Joshua had the divine encouragement of looking forward to an eternal inheritance in the Kingdom that the Lord would ultimately establish.

God’s Words of Encouragement to Ezekiel

Ezekiel was another servant of God called upon to do an incredibly difficult task. He was to speak to a nation that had rebelled against God. God advised,”Don’t be afraid, even though their threats surround you like nettles and briers and stinging scorpions. Do not be dismayed by their dark scowls, even though they are rebels. You must give them my messages whether they listen or not!” God’s encouragement came as a gift of understanding, as Ezekiel listened carefully to God’s word and applied them in his life. God’s words had penetrated deeply into Ezekiel’s heart and given him the courage he needed to fulfill his mission. God did not offer much hope that others would listen, repent, and change their lives. But God’s word, his divine encouragement, had changed Ezekiel and given him the hope of eternal life with the Lord God.

We can receive the same encouragement that Moses, Joshua, and Ezekiel experienced. For God’s promises are sure, and his nature unchanging. He is always faithful and merciful to those who seek to accomplish his will in their lives. Even though we may suffer in this society as Christ suffered, we can have the courage and strength to endure with patience. For, as Christ’s ambassadors, he promises to encourage us and strengthen us to do his good works. Jesus our Messiah and our Heavenly Father, are “for us” and will provide what we need when we need it. With this divine encouragement on our side, we live in the hope of eternal life, and no evil force will overthrow us. This is a great source of encouragement.

Paul’s Life “I Will Never Forsake You”