You are here: COG Webcast > Sermons and Media > Videos > Cult of the Woke Or Christ — Seekers of Truth

Cult of the Woke Or Christ — Seekers of Truth 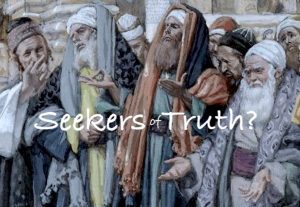 Cult of Woke or Seekers of Truth

We are at a turning point where the ‘Cult of the Woke’ is clashing daily with the seekers of truth. A recent national columnist was bemoaning the lack of a ‘generosity of mind’ that used to be the norm in Western civil society. For, the Woke mob mentality of today will not allow for the possibility that others might be right and they could be wrong. There is no humility or the slightest realization that their perspective might possibly be in error. As a result they are vociferous in their attacks against others who hold to differing opinions. Perhaps you have had to deal with these people? But ‘Wokeness’ is just a new label for an old phenomenon, one that the apostles in the first century experienced.

Peter and John understood the ‘Wokeness’ of their time. It was an age when the religious class actively tried to silence any opposing religious perspectives. So, when these disciples, through the power of Christ, healed a man who had been lame from birth, the people were amazed. Peter reminded the crowd that they had been complicit in Jesus’ death, but he also realized that they had acted in ignorance. Their part in Jesus’ murder may have been mere inadvertence, or more likely willful blindness to an inconvenient truth. They were fearful of the cancel-culture of their day that would put them out of the synagogue. And that would make them pariahs, and result in their destruction economically and religiously. It was not socially acceptable to align with Jesus Christ, and there were real costs to being seekers of truth.

Wilfully Blind to the Miracles

So it was no surprise when the disciples were hauled before the religious authorities who demanded that they stop preaching in Jesus’ name. The Sadducee leadership were jealous and afraid of losing their power. And in their wilful blindness they would not acknowledge the miraculous healings that were evidence of God’s power. Even after the disciples were miraculously released from the jail by an angel, these hard-hearted political/religious leaders only sought to kill the disciples who were undermining their authority. When commanded to stop preaching about Jesus, Peter’s now famous reply was, “We must obey God rather than human authority.” This infuriated the people who wanted to eliminate the dissenting voices of the followers of Jesus.

There are those today who are standing up against the state’s tyrannical health orders in shutting down church fellowships. And some of these ministers and their fellowships have been paying the price in terms of jail time and outrageous fines. All, at a time when it is business as usual in the big box stores, and other commercial venues. Thankfully, there are still those in the legal community who value our rights and freedoms and are fighting on behalf of those with strongly held religious beliefs. But there are still those in political power, who like the fearful Jewish leaders in Peter’s day, are afraid of losing power over their public policy failures. So their plan is to silence the dissenting voices.

When the counsel of Sadducees failed to dissuade Peter and his companions from teaching the truth about Jesus, they began plotting to kill them … the ultimate step in cancel-culture.
However, Gamaliel, a leader among them, cautioned them against such rash actions. He advised that if this Jesus was like all the previous false messiahs his influence would die a natural death without their interference. In an unusual move, Gamaliel was willing to concede the slimmest possibility that the council could be wrong. And, if there was that slightest chance of error, then they would be fighting against God, himself.

This conclusion is rare among those caught up in ‘woke’ society. So Gamaliel stands apart, as a unique voice of calm and reason in the midst of the hostile institutional elite of his time. Seekers of truth should remember Gamaliel’s example and not prejudge people or situations. When dealing with a corrupt system, you can never know who you might help, or who might overcome their blinders to come to your aid.

Paul, writing to the Ephesians, addressed the issues in that gentile city. He advised the believers to avoid living like the majority of their society. They lived in a corrupt culture that Paul characterized as being morally darkened. The people in Ephesus, in their wilful ignorance, had banished themselves from a knowledge of God. As a result, they had become hardened and insensitive to the truth, and their ability to reason had been clouded.

Paul encouraged his followers to be seekers of truth, who had repented of these old ways of thinking. They had embraced God’s wisdom, and had a new purpose and vision of the future. They were no longer caught up in the ‘Wokeness’ of paganism, and forced to participate in the religious practices for fear of censure.  They could look past the present conflicts and forward to the times of refreshing and the restoration of all things that God had promised.

Embracing the God of Truth

Those in secular society are living life as if they are blindfolded in a world of illusion. They have no foundational truth in their lives. They only have a tenuous grasp on what they call ‘my truth.’ Pilate, when questioning Christ found it hard to believe that there was objective ‘truth.’ He asked Jesus if he was a king, and Christ confirmed that he was, but not a king of this age. Christ is the King of the kingdom that will replace the woke cults of human society. He is the foundation and source of truth. And seekers of truth are preparing for his kingdom now. They have begun to put on a new life, one that rejects falsehood, lies, rumours, and half-truths. Everyone who loves the truth will listen to Jesus Christ and not the ‘Woke Crowd.’
Jesus’ example gives the truth-seeker the courage to speak the truth and be a faithful ambassador for Christ. As seekers of truth, Jesus provided his message of reconciliation to all people, the hope that they could ‘come back to God’ and he would forgive them. The advantage of believers is that they can search out the truth, and know that God will be true, though every man is a liar.

Learn more:
Avoiding the Traps of the Religious