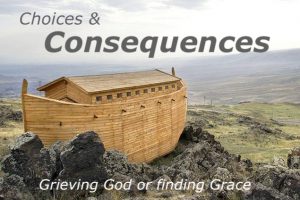 There is much turmoil in the world of politics and we are being asked to make important choices. We must remember that choices have consequences. In the time of Ezekiel, the prophet, the political leaders of the day assembled before him with a request. Paul reminds us that God’s answer to those leaders is as important to us today, as it was to the elders of Israel then. Whatever we are enduring, others have endured in the past. But it is through acknowledging God’s faithfulness and relying on his deliverance through every trying circumstance that we will have success. So what was God’s message for the leaders of Ezekiel’s day?

God is a loving merciful Father, but he is also a just judge. And God was disgusted by the hypocrisy of the leaders who put on a pretence of wanting God’s guidance, while living corrupt godless lives. God accused them of falling into sin, and valuing worthless things, “idols” that were powerless. So there would be consequences, if they did not change their ways. Choices have consequences, and their choices would ultimately result in the traditional plagues of famine, war, and epidemics. They would not save themselves or their children, unless the whole nation responded to God’s rebuke with repentant hearts. Only in changing their behaviour and embracing God’s teachings could they alter the consequences. For God does have mercy on those who repent and return to God. In our day, the choices are every bit as stark as in Ezekiel’s day. What will we choose?

In Times of Civil Conflict

We live in a society that is profoundly divided over the questions of culture and religion, and how we should live life. The sides are no longer reconcilable. As in the previous 2 Civil wars in the United states, the one over Britain’s Intolerable Acts and the other over states rights and slavery, the divisions today are profound. We can learn many lessons from these historic conflicts, but an important one is ‘choices have consequences.’

When Jesus spoke to his disciples of that future time of world turmoil and the end of the present age, he likened it to the time of Noah. Our time is like Noah’s as we too are seeing a stark contrast between two opposing factions. There are those who would live violent corrupt lives who grieve God by their wicked behaviour. They cannot escape the negative consequences of their actions. But there are also those few who reject evil and find favour with God and accept his grace. They, like Noah, choose to walk in the spirit, following God’s directives, and reaping good consequences. So what are the lessons that we should learn from Jesus’ and Paul’s advice to consider these historic events and their consequences?

We must not grieve God by being hard-hearted, deceitful, and violent. We cannot continue to choose a lifestyle that involves destruction, theft, or lies, because these choices have consequences. Rather, as Paul tells the Ephesians, we need to get rid of the old corrupt self, and become a new creation. This occurs when God’s spirit renews our mind, helping us to resist the evil impulses, and motivating us to encourage others with the truth. Like Noah, we can find grace with God if we turn from our selfish ways to live God’s way. With God’s guidance Noah was able to build an Ark and preserve humanity. And this message resonates through the ages. Our choice to follow God and speak the truth in a time of political turmoil and cultural confusion will also have positive consequences. Our choices have consequences, and God has wonderful promises for those who choose to do good and serve God.