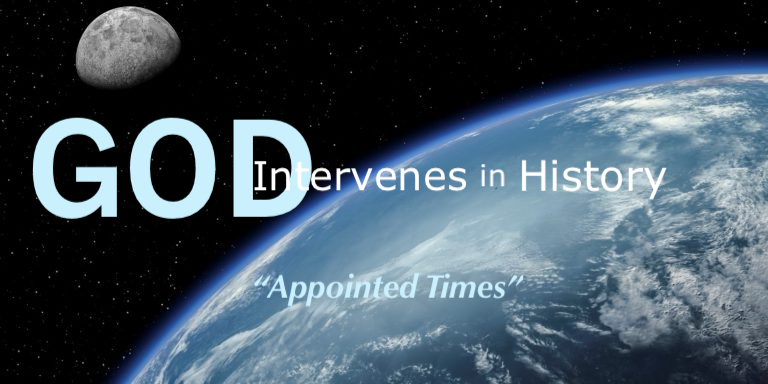 What  is meant by “Appointed Times?”

God is a master of time. He is the Creator of time and seasons. And God intervenes in history and acts at just the right time. Even the demons when speaking to Jesus acknowledged that their time for judgment had not yet come. But, it would come at the appropriate time. Jesus, as he saw the fall festival approaching, urged his family to go up to keep the feast at the appointed time. But he would not go up with them just then. He was waiting until the time was right. Then he would also go up and keep the Feast of Tabernacles, one of God’s appointed times. From the beginning of creation, God had established the heavenly lights to proclaim the seasons, and herald the appointed times. Times that God established as Holy Days and festival seasons. So how do we know when these times occur?

The Feasts of the Lord in Scripture

Moses, obeying the command from the Lord God, wrote down the instructions necessary for the people to observe these appointed times. In the book of Leviticus, the Feasts of the Lord, the weekly Sabbath and 7 annual Sabbaths, are described in detail. The biblical scholar, Dr. Bacchiochi when asked about his book on the biblical festivals, stated emphatically that they demonstrate,”God is active in history!” The annual festivals, the appointed times, reveal the many ways in which God intervenes in history. Traditionally during the fall festival season the biblical Psalms of Ascent were read each day from the Feast of Trumpets (Yom Teruah) to the Day of Atonement (Yom Kippur.) They began with Psalm 120 that is thought to have been written by Hezekiah. His story is one that demonstrates that God intervenes in history.

Isaiah, the prophet, provides a historical account of this time that is supported by a number of archeological finds. Hezekiah was the king of Judah in Jerusalem at a time when the Assyrian empire had already killed, captured, and deported many Israelites of the northern ten tribes. Much of Judea had also fallen under Assyria’s onslaught, and Jerusalem was about to be besieged. As the Assyrian commander boastfully pointed out, he had decimated all the other cities and gods who had opposed him. Who was Hezekiah to think that Jerusalem would fare any better than the other nations? It was a desperate situation in spite of the preparations the Jerusalemites had made to bring in water, and reinforce the walls to withstand a siege.

But Hezekiah and his people were unique among the nations of his day. He believed fervently that God intervenes in history. And he had centuries of examples of God’s deliverance to encourage him. So King Hezekiah humbled himself and took courage and fasted and prayed for God’s intervention. He realized in this time of trouble and rebuke, that only the Lord God could deliver them. Their God alone could save them from the sword, and captivity to this cruel foreign invasion force.

It was the Lord God alone who had made the heavens and earth. And the Lord had the power to destroy those, like the Assyrians, who mocked God and God’s servants. God heard Hezekiah’s heartfelt plea and promised to defend the city. He sent an angel to destroy the troops who had gathered to plunder Jerusalem. Hezekiah’s trust that God intervenes in history was rewarded and the remnant of his people in Jerusalem were saved.

The apostle Paul reminds Christians to remember the stories of their spiritual ancestors, men like Hezekiah who were faithful servants of God. Paul wanted the brethren to be encouraged so they would be strong in faith. It was a constant danger to be caught up in the idolatry of the society around them; the love of money, worthless human ideologies, and immoral practices. They, like their ancestors, had to guard against forgetting God and wandering from the right way of living. Observing God’s appointed times, as Jesus and the apostles did, would bring to their remembrance the many ways that God intervenes in history. These yearly reminders would bolster their faith, and encourage them even in times of great trouble.

So are you worshipping God at his appointed times? Are you gaining the benefits that derive from obeying God’s commands to keep his holy days? If so you will soon have another opportunity to learn the lessons of history that God has prepared for your encouragement.