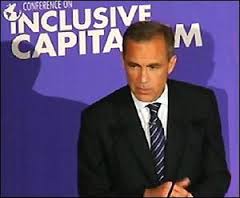 Mark Carney, present governor of the Bank of England and chairman of the International Financial Stability Board (as well as a well-respected past governor of the Bank of Canada), strongly warned a conference on “Inclusive Capitalism” at the City of London—which was attended by the elite money managers in charge of one-third of the world’s investable money (about $30 trillion—yes that’s trillion not billion!) that they cannot take the continuation of the capitalist system for granted because the basic social contract has been breaking down!